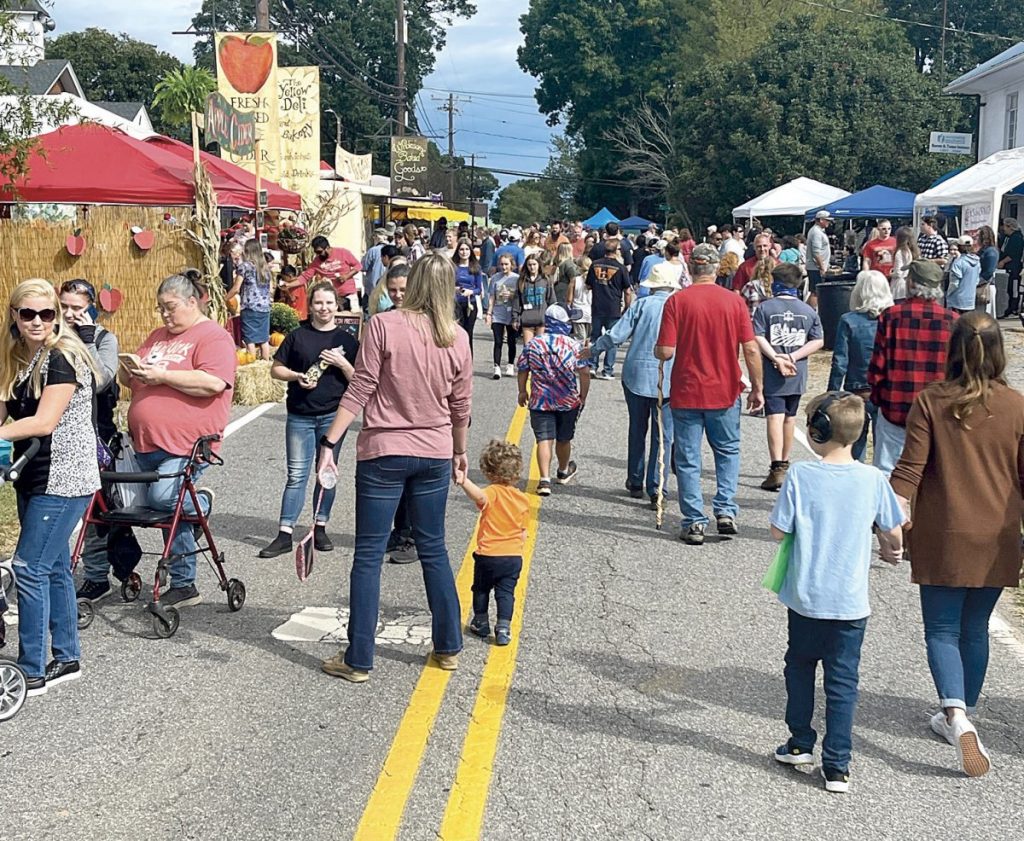 PERFECT WEATHER — It was the perfect day for the Hiddenite Celebration. An estimated crowd of 15,000 people attended the event, which had been cancelled in 2020 and 2021 due to COVID.

The Hiddenite Arts and Heritage Center hosted the 41st Annual Hiddenite Celebration of the Arts on Saturday, Sept. 24. The area of Hiddenite was buzzing with fun, including Gospel and folk music, activities for children, craft vendors sharing their wares, and people visiting with each other up and down the street.

The Hiddenite Arts and Heritage Center is a focal point on the Eastern side of Alexander County. It was founded in 1981 by R.Y. and Eileen Lackey Sharpe to enhance the lives of community citizens.

“Celebration was phenomenal and the perfect day for a street festival celebrating Appalachian Heritage and the many others that form the community throughout Alexander County,” said Donna Latham, Hiddenite Arts Executive Director. “Living history demonstrations funded by South Arts to preserve traditional Appalachian Art forms set the mood for the street festival, where an estimated 15,000 visitors shopped from a record number of vendors, enjoyed amazing talent on four stages from local gospel groups and the Come Together Choir on Gospel Stage at Hiddenite Methodist Church, to Native American, Latino, Irish, Old Time, and Hebrew at the Folk Life Stage at the Educational Complex Ballfield to App State Steely Pan Drum Band and DIYE’ African Drumming and dance at the App State Stage located at Hiddenite Baptist Church.” 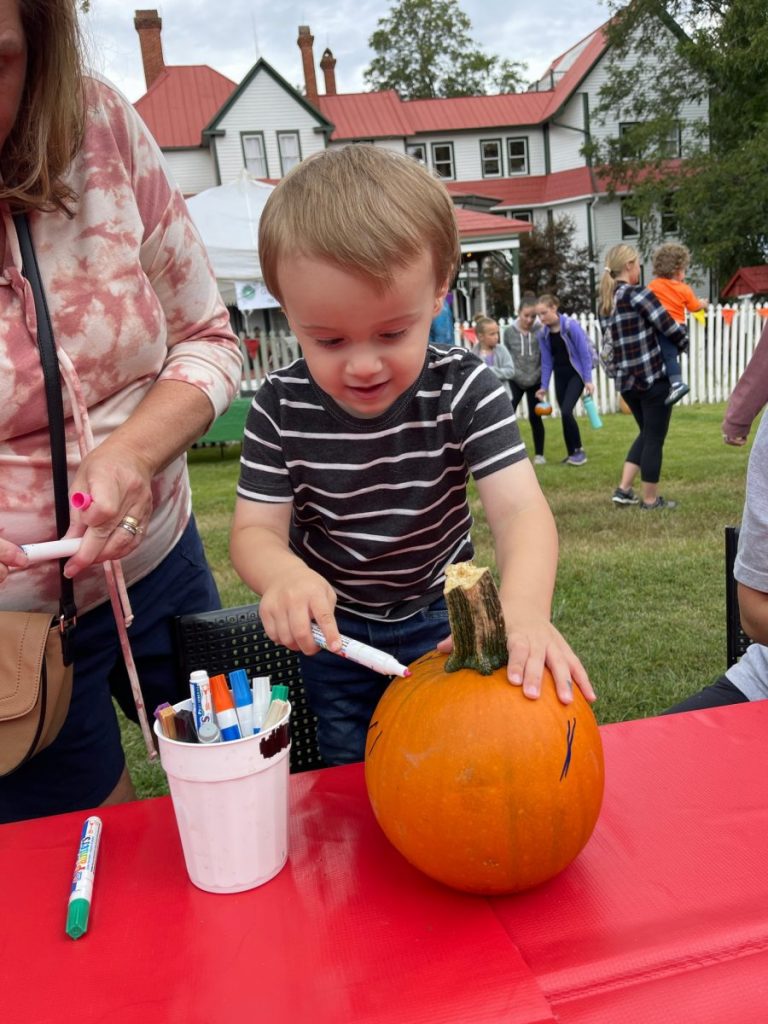 Griffin Downs, age 2, son of Parker and Morgan Downs, from Stony Point, enjoyed decorating a pumpkin at the 2022 Hiddenite Celebration.

One of the yearly highlights for the Center is the Annual Hiddenite Celebration of the Arts. Due to Covid Restrictions, the Celebration was not held for the past two years. This year, people were happy to be out and about on a beautiful day listening to music, sampling delicious food, playing with their kids, and simply visiting with old friends.

When asked about her favorite part of the day, Alexander County resident Cheryl Walton said, “It’s great to be able to socialize with the community.” Travis Crowder and Becky Austin were two of the people feverishly making fried apple pies with members of the Church of God in Hiddenite under their tent, one of the community’s favorite booths, as evidenced by the very long line for pies. Bagpiper Melanye Brennan has lived in Hiddenite for six years and enjoyed performing at the opening ceremony. Tevin and Courtney Clark said their favorite part of the day was definitely the food. They were there with their two little ones for some delicious homemade funnel cakes. Keyley Sigmon and Bailey Bowman enjoyed the famous homemade egg rolls and the fried apple pies that are served each year at the Celebration.

Appalachian State University had a strong presence at the Celebration on Saturday bringing their GeoBago for free exploration. This bus acts as a rolling science center and gives adults and kids opportunities to focus on the geology of the region.

W.E. Hidden is credited with first discovering the gem of Hiddenite in 1879, hence the town name of “Hiddenite.” Appalachian State also had representatives from their Turchin Center for the Visual Arts who provided a variety of materials for children to create freely. The famous “Steely Pan Band” from Appalachian State was on hand as well to bring their Caribbean styled music to the crowds that has made them so popular.

“Mr. Mural,” Todd Donahue of Statesville, was doing what he does best at the Hiddenite Festival. He was working on his detailed mural on the side of the Hiddenite Food Pantry to showcase and thank the Alexander County farmers who continue to contribute to the Pantry. Visitors to the Hiddenite Celebration could see the mural close up and its amazing details. 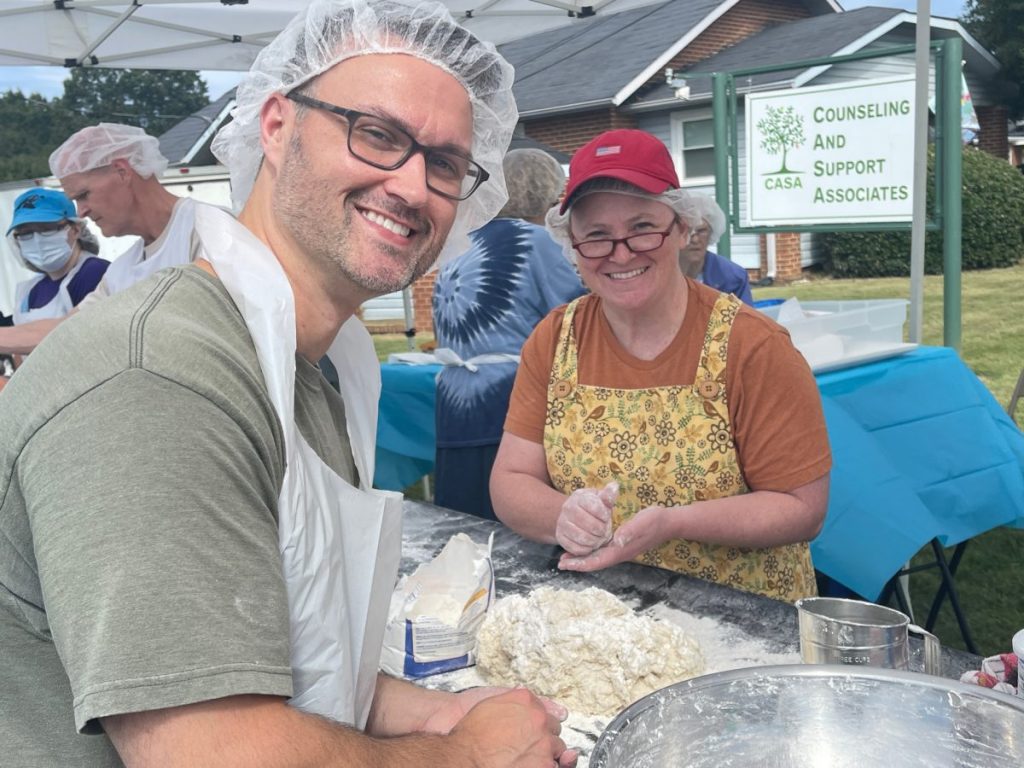 APPLE PIE TIME — Travis Crowder and Becky Austin are shown above, making the “famous” fried apple pies that the Church of God in Hiddenite is known for at local festivals.