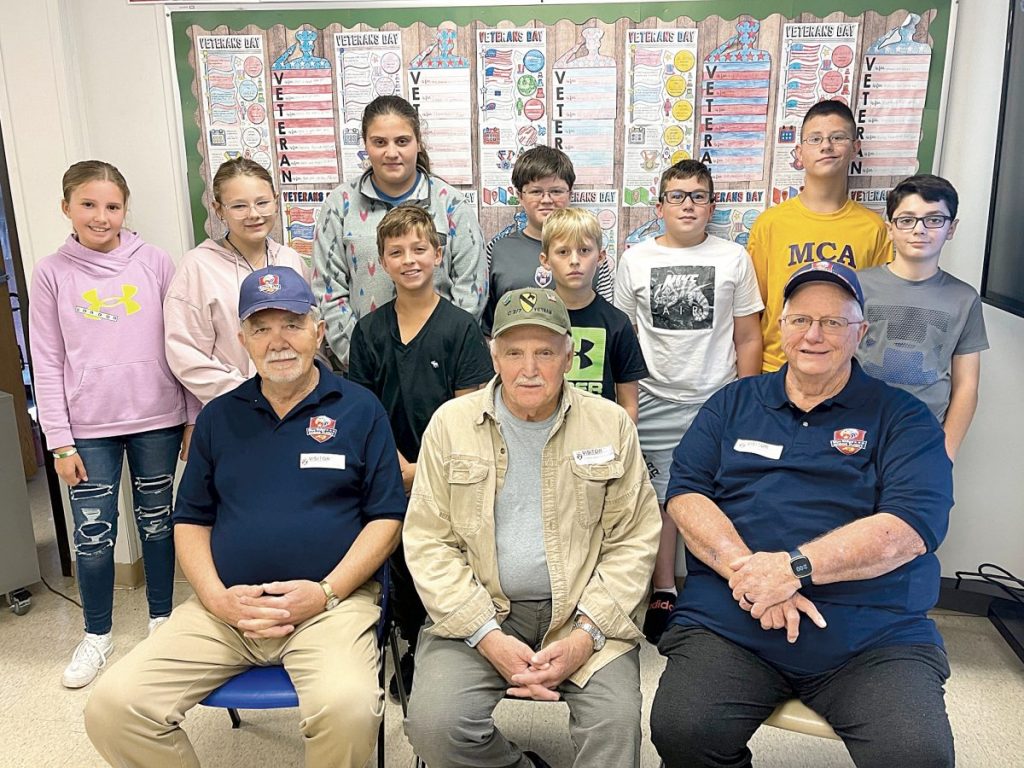 On November 1, 2022, three local veterans visited sixth graders at Millersville Christian Academy to share their experiences in the military and to share about their recent Honors Flight to Washington, D.C. Ray Bruder (Navy ’67-’71), Dale Bowman (Army ’67-’68), and Terry Kerley (Army ’70-’72), were invited to share their Honors Flight experiences, but ended up sharing much more with these impressionable young people.

The students prepared for them by participating in a scavenger hunt to find details about the official Veterans Day holiday. They then made posters and wrote acrostic poems sharing their thankfulness for the veterans who have served the United States over the years.

The gentlemen began by talking about the Honors Flight and sharing photo books of the event. According to veteran Ray Bruder, most states now have Honors Flights with the mission to bring all veterans directly to their own memorials. The three veterans visiting MCA had participated in the Blue Ridge Honors Flight, which began in 2005 as HonorAir. The gentlemen explained that the Honors Flights initially began with WWII veterans, then the organization began inviting veterans from the Korean War and the Vietnam War. This particular flight took veterans to Washington, D.C. to visit war memorials on Oct. 1, 2022.

These three men were part of a group of 91 veterans who met at the Asheville Airport to fly to Washington. Other veterans from Alexander County who participated were Dale Chapman, Tommy Herman, Joey Campbell, Gene Dagenhart, and Bill Johnson. Herb Poole was scheduled to fly with them, but could not due to illness. Each was assigned a guardian to guide them along the way. Their guardians were able to research their assigned veterans, to know a little about them prior to meeting them. After being treated to breakfast, the veterans and their guardians boarded the plane to DC together. 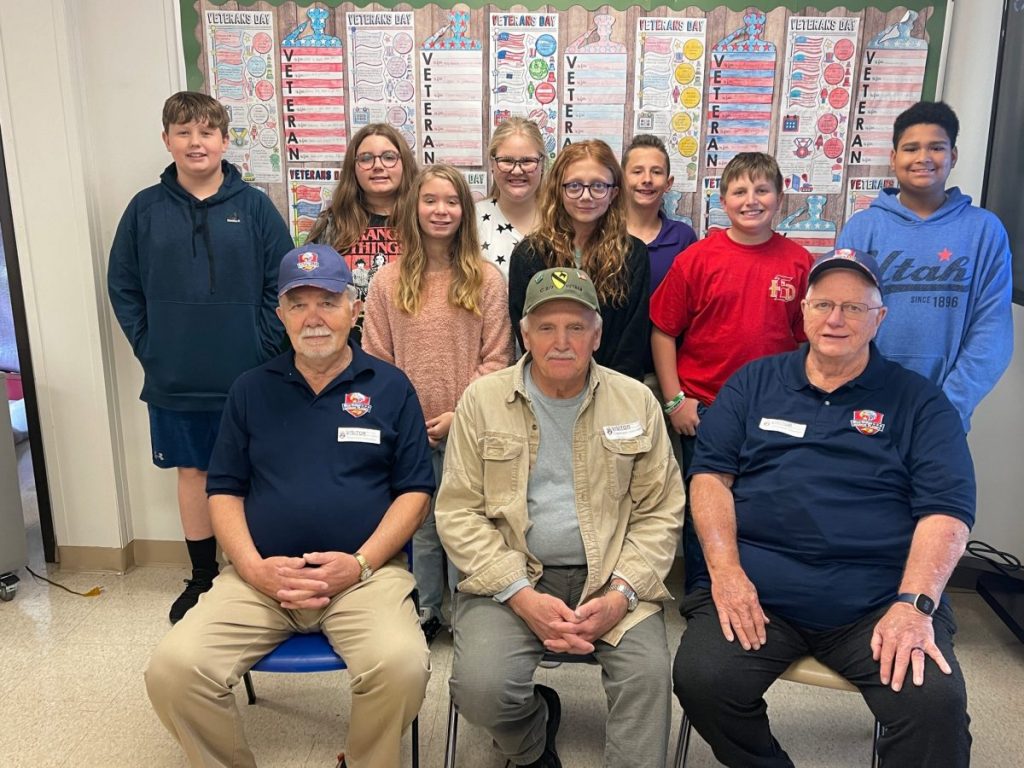 Terry described this day with great emotion and said he had been told during orientation that this would be one of the best days of his life and he said, it truly was “one of the best days of my life.” He talked about the camaraderie he felt when he boarded the plane with so many other veterans. He said it took him back to the time when he first boarded a plane as a 20 year old draftee with others in the same situation.

The men then talked about spending time at the Vietnam Memorial, which consists of two 200-foot long walls that have 58,000 names of fallen soldiers on them from the Vietnam War. Bruder explained that the names on the memorial are arranged in chronological order by date and their casualty and begin and end at the origin point, or center, of the memorial where the two walls meet. According to the Blue Ridge Honors Flight Facebook page, “having the names begin and end at the center is meant to form a circle — a completion to the war.”

Dale spoke about his experience seeing the Memorial and said it was very moving. There were four or five names he wanted to locate. This was his second time visiting DC.

Terry said this was his first time seeing the walls and it was very emotional. He said, “There were people on that wall I knew personally.”

Students had been asked to write questions to ask the veterans. They wanted to know what it was like to be in the military. All of the men spoke of how military life has changed since their times of service. They said they were not allowed to quit. It was not an option. They were taught to endure hardships together. Their superiors were very hard on them but it was because, as Terry said, “They all knew what war was really like and they were trying to prepare us.” All of the servicemen bonded together through these difficult times.

This hardship is necessary for survival in true war time. Ray Bruder, who volunteered for the Navy at age 18 because he knew the draft was coming, recalled an incident when he was aboard a ship that was hit with a mine on July 5, 1970. Many of the men aboard the ship were watching the film “The Good, the Bad, and The Ugly” and they began to hear a repetitive noise. They soon realized it was a mine attaching itself to their ship. Ray has a recording of one of the sailors making a cassette tape for his wife and the strike can be heard in the background. He shared this recording with the students as they sat listening intently.

Bruder said, “No one had to think. We just reacted. We knew what to do because we had been trained for these situations.”

Dale was drafted at age 19 (almost 20), but said he “would have volunteered anyway.” This led to lots of questions about the draft and what would happen if a person said, “No.” This requirement is a very hard concept for these young students to comprehend. We live in a disposable world and in a world where people quit at the least bit of being inconvenienced or offended. These men spoke to them about honor, about commitment, about staying strong and taking pride in service.

In Washington, the veterans had the privilege of watching a “Changing of the Guard” ceremony at Arlington National Cemetery. A WWII veteran was selected to lay the wreath during the ceremony. This was a very moving ceremony for them to witness and they talked about losing WWII veterans. Soon they will all be gone and who will continue to tell their stories?

Bruder also talked to the students about the long lasting effects of Agent Orange, a poisonous defoliant that was used during the Vietnam War. He showed them the heart pump he wears and his illness can be attributed to Agent Orange exposure. The students related to this because some of them had lost loved ones due to the after effects of the deadly gas.

Ray Bruder also shared about the welcome parade they received upon returning to the airport in Asheville. Some of these men never had a proper “welcome home,” so this was very special to them. They were surrounded by hundreds of people when they deboarded the plane. He also said, “We were also surprised on our return flight with a Mail Call. When you are in the military, one of the things you always looked forward to is Mail Call. Our families and friends were asked to send mail to an Honor Flight address and each veteran received a box of mail on our flight home. Just another example of how they made this trip special.”

When listening to these men, there is a sense that they are a dying breed. They don’t resent their time in service. They exhibit pride in how they served their country. They don’t complain about what they had to endure to be ready for war.

These 6th graders had recently studied the difference between primary and secondary sources and on Tuesday, Nov. 1, they got to hear from three primary sources who served their country well, who left their families, who endured losing friends, and who still carry lasting effects from their times of service. They were able to impart wisdom that can only be given from those who lived through these times. Their willingness to share certainly stirred the fascination and respect of these sixth graders. That is what Veterans Day is intended for. 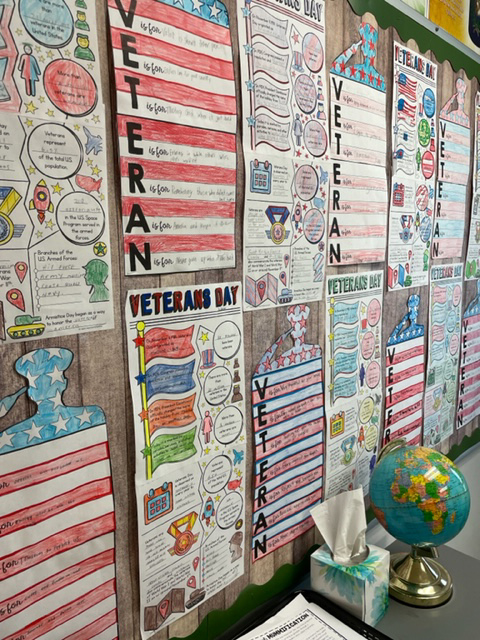