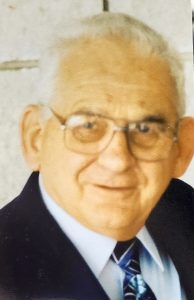 Along with his parents, he was preceded in death by his brother, Roy Fox; sister and brother-in-law, Mae and Harlee Dagenhart; sister, Rava Nell Wike; brother-in-law, Glenn Hathcock; an infant brother; and mother and father-in-law, Frank and Phebie Speagle.

Survivors include his wife of 61 years, Peggy Speagle Fox of the home; son, Bruce Edward Fox and wife Tonya Webb Fox; grandson, Bryson Edward Fox; and granddaughter, Shelby Dawn Fox, all of Hickory; sister and brother-in-law, Phyllis and Richard Mills of Charlotte; sister, Louise Hathcock of Hickory; sisters-in-law, Helen Fox of Taylorsville, and Dot Denniston of Anderson, Indiana; and brother-in-law, James Wike of Stony Point. He was also survived by extended family, Glenda and David Humphreys of Conover; Dennis and Linda Webb of Ohio; and Crystal Webb of Wilmington. His many surviving nieces and nephews loved him very much.

He worked for Hickory Chair in the foam rubber department for 14 and a half years. Also, he retired from the GE transformer plant after 23 years. George was a member of the Royal Chapel Church of God and a former member of the Moose Club and Longview Civitan Club.

He and his wife traveled to all 50 states and Canada. They enjoyed camping and going on cruises, and owned a winter home in Clearwater, Florida, where they have friends from all over the US and Canada.

George was also an associate member of Skycrest Church in Clearwater, Florida, and a former member of Westview Methodist Church. George was a trustee, a member of the choir, and served on the pastor-parish relation committee while there.

A visitation will be held on Sunday, November 27, 2022, from 4:00 until 6:00 p.m. at Hickory Funeral Home. The funeral service will be held on Monday, November 28, 2022, at 3:00 p.m., at Royal Chapel Church of God. Rev. Carlton Davidson and Rev. David Root will officiate the service. Burial will follow in the church cemetery.

The family would like to extend a special thanks for the good healthcare from Dr. Douglas Miller and the Lincolnton Rehabilitation Center health staff.

In lieu of flowers, donations can be given to the Youth and Children groups of Royal Chapel Church of God, 7190 George Hildebran Rd., Hickory, NC 28602.