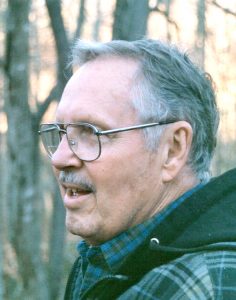 William “Bill” Campbell, 83, passed away at his home, in Hiddenite, early in the morning of December 6, 2022, with his beloved wife of 63 years, Carolyn, at his bedside.

He was born February 8, 1939, the son of the late Hazel Campbell Vasbinder, and raised by his family in Vashti. Bill attended high school in Michigan and enlisted in the US Air Force. He later moved to New Orleans, Louisiana, where he met and married the love of his life in 1959. There, they raised their children on the west bank of New Orleans, Louisiana.

Bill worked most of his life as an appliance repairman, first with General Electric, then owning his successful business “After Hours.” He moved to North Carolina in 1985, where he lived in Hiddenite and was a member of the Vashti Community, continuing as “Campbell’s Appliance Repair.” He was a hard worker by trade but a family man first.

Always active at work and play, he enjoyed sports, gardening, reading, music, family time, and many long hard-working hours on this land he grew to love. He was a friend to many, always lending a hand or a dollar to anyone in need. Enjoying his love of life to the fullest, where he was a steward of the land, and working with the NC Forestry Service. He was a coach and mentor to many young men and a fan of the Carolina Tar Heels, “Go Tar Heels!”

Including his mother, he was preceded in death by a sister, Shirley Austin; a brother, Tony Brackett; grandparents, Melvin and Frances Campbell; several aunts, uncles, cousins, a niece, and father and mother-in-law, Lester and Velma Hammons, whom he loved very deeply.

The family wishes to thank friends and neighbors for their love, support, kindness, and friendship. A special thanks to Hospice of Iredell, who helped allow this transition with dignity, support, and professionalism, while always displaying the humanity that was exhibited during such a difficult time, especially Cassandra Ramon, Marilyn Elder, and Aaron Mecimore. Also, a special thanks to the staff of Adams Funeral Home.

No memorial service is planned at this time.

In lieu of flowers, memorials may be made to Hospice of Iredell County, SECU House in Winston-Salem, or NC Forestry Service in Taylorsville.

Adams Funeral Home and Cremation Services is honored to be serving the family of William “Bill” Campbell.