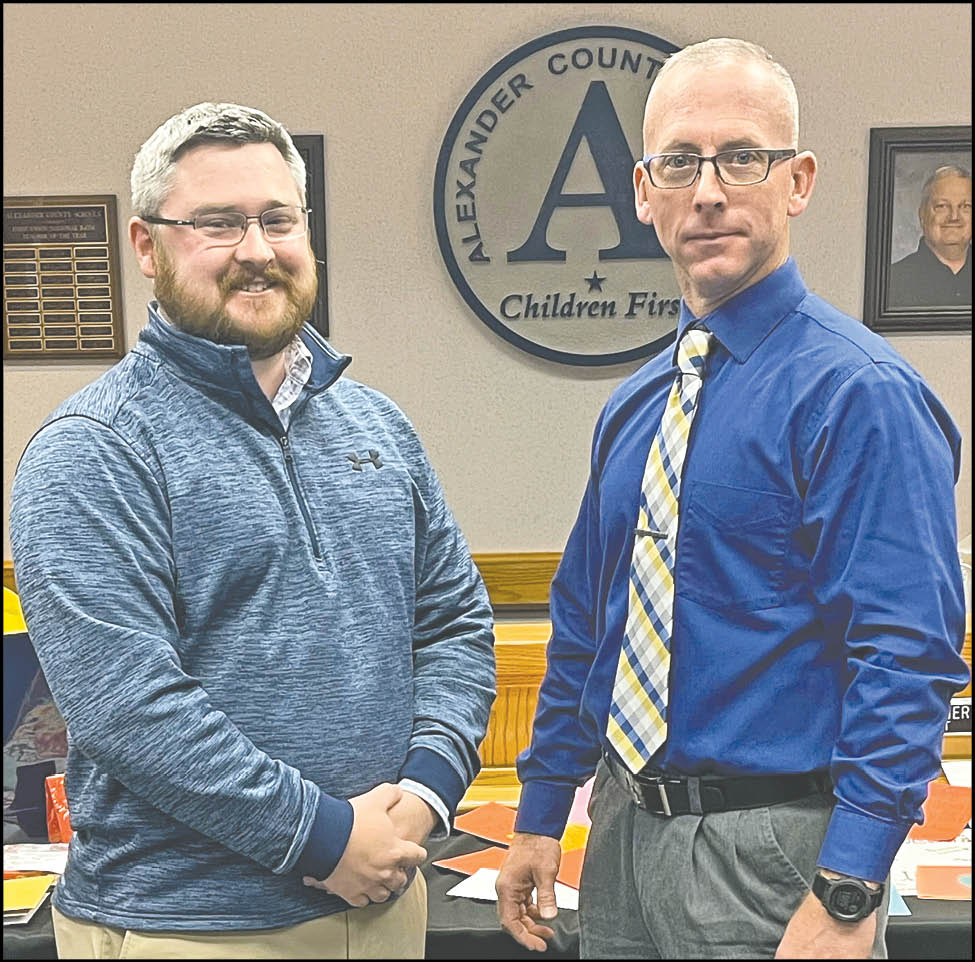 FUNDING FOR SUGAR LOAF — Sugar Loaf Elementary Principal Joe Mabry heard the news at the school board meeting January 10 that his school will be awarded a grant in the amount of $5.3 million for a construction project, which includes a new office area, a new gym, and a renovated media center. He is pictured above (left) with School Board member Anthony McLain.

Alexander County Schools Superintendent Dr. Jennifer Hefner truly saved the best news for last as she shared exciting news for Sugar Loaf Elementary School near the end of the monthly school board meeting on Tuesday, January 10.

Hefner shared that she had received a phone call Tuesday afternoon at 4:45 p.m. from State Superintendent Catherine Truitt sharing that Alexander County Schools had been approved for a grant in the amount of $5.3 million dollars in state money to build a new gymnasium for Sugar Loaf Elementary.

The project will also include a new office area and a renovation of the school’s media center. The school system was initially told in September that their grant application had been denied, but after some budgetary adjustments at the state level, Truitt was able to share with Hefner that their grant was now approved. Dr. Hefner was excited to share the late breaking news. Principal Joe Mabry and board member Anthony McLain both credited prior board members, administration, and staff members for working hard to bring this about.

The money will come from a Needs-Based Public School Capital Fund. Funding for buildings and improvements typically falls under the responsibility of the counties, according to state law, but occasionally the state releases grant money for capital projects. Director of Facilities Chris Campbell and the ACS Finance Department can be credited with applying for both the Sugar Loaf and the Bethlehem grants for facility improvements.

State Superintendent Truitt released a statement late Tuesday, saying, “In creating larger, more modern gathering spaces, we increase opportunities for students to learn together, collaborate with one another and grow. I look forward to seeing the progress made in the years to come and visiting this school in person!”

A new flooring project is underway at the gymnasium at Taylorsville Elementary and Campbell reported that the work had “hit a snag.” When the existing gym floor was torn up for replacement, the flooring underneath was found to be rotten, due to water damage. This means an increase in cost and an increase in time for completion. Principal Janel Lingle and Physical Education teacher Courtney Bebber are making the necessary adjustments for students during this time without a gym and holding P.E. classes in other locations.

During the Public Comment section of the meeting, resident Andrew Latchford spoke about parental involvement and asked the board to review their policy on how public comments are heard. He stated that more than one person should be allowed to speak on the same topic.

Wittenberg currently has 277 students and 21 classroom teachers. She said at Wittenberg, they focus on the Three Ps: Positivity, Presence, and Perseverance. Glenn and her staff have goals to increase parental involvement at Wittenberg. She thanked the school board for assisting with additional staff to better serve students. Glenn has served as the principal of Wittenberg since late November.

She is also the director of the Alexander Virtual Academy, which currently has 13 students. These students choose to attend school virtually due to health issues, behavioral challenges, or simply a preference to learn at home. The students do meet in person on Wednesdays for in person learning at Wittenberg. Dr. Hefner shared later in her Superintendent’s report that the Alexander Virtual Academy will not continue next year because with such a low number of students, it simply isn’t cost effective. She reviewed school closure policies with those in attendance.

Testing and Accountability Director Andrea Robinette shared an update on student achievement as measured at the beginning of the year (BOY) and the middle of the year (MOY) using the DIBELS 8 assessment (Dynamic Indicators of Basic Early Literacy Skills). In studying the charts, Dr. Hefner noted her concern about students entering kindergarten in Alexander County are well below other students across the state. K-3 students in Alexander County have made progress on mid-year assessments, but Hefner noted that she would like data collected on which students attend preschool prior to entering the Alexander County Schools system. She is asking elementary principals to communicate and look for ways to help raise these achievement scores. Principals will use these DIBELS scores to help guide their instruction for the remainder of the year.

In her closing report, Hefner noted the loss of Alexander County Manager Rick French. She said that he played a vital role in the progress of Alexander County and he will be greatly missed.
Hefner shared that after the recent scare with Buffalo Bills football player Damar Hamlin, there have been questions and some unrest about what could happen at sporting events in Alexander County. She noted that there are several emergency measures in place, including automated external defibrillators (AED) on all school campuses, certified trainers at every football and wrestling practice and game, emergency management services on standby at every home football game, and CPR trained staff at each school.

The next school board meeting will take place on Monday, February 13, at 6 p.m. The meetings are typically held the second Tuesday of each month, but the February meeting has been changed due to the Valentine’s Day holiday. 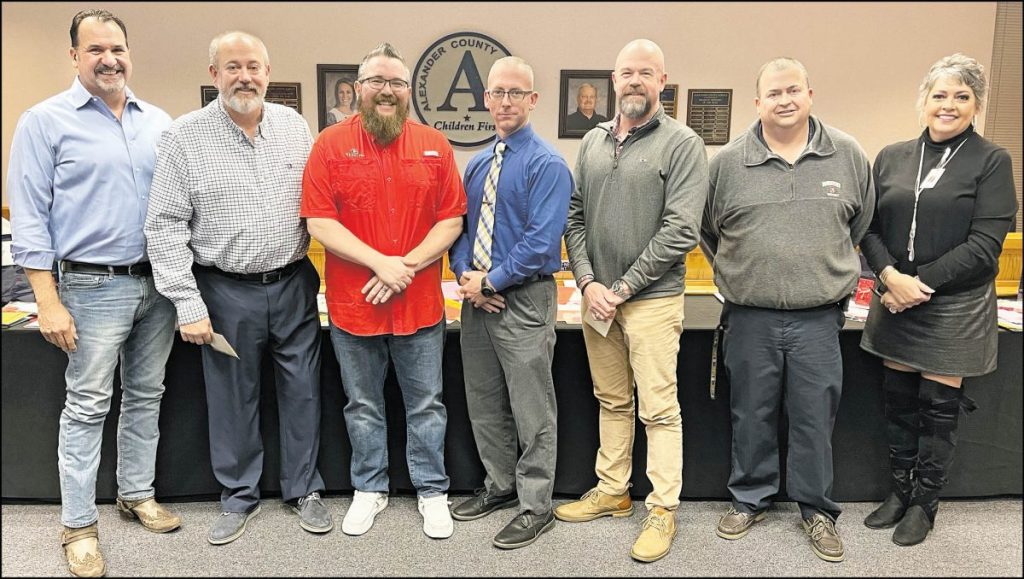