On the day, ACHS finished 3-1. The Cougars swept a pair of games in JV action and split the varsity contests.

The Alexander JV Women’s Team opened the day with a 28-14 win over South Caldwell. Alexander led 19-8 at the half and held South to just six points in the second half en route to the 14-point victory.

Alexander’s JV Men made it two straight at Sawmills with their 38-28 win over the home standing Spartans in game two.

The Cougars doubled up the Spartans 14-7 in the fourth period to lead by 10 points by the end of the game.

Aiden Hager and Jaden Chapman led Alexander with eight points each, while Braden Walker chipped in with six points.

Alexander’s lone defeat of the night came in the varsity women’s game. South Caldwell busted open a close game with a 32-10 run over the final two frames. The second half domination allowed the Lady Cougars to grab a 58-30 victory. 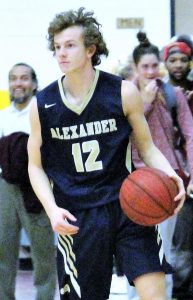 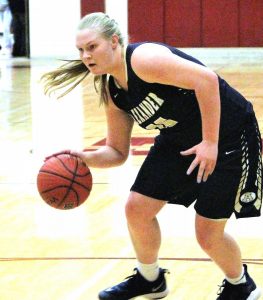 Nikki Hagy had nine points and 14 boards vs. South Caldwell.

The game was highlighted by a huge performance by South Caldwell guard Mackenzie Starnes. Starnes hit on 12 of 22 shots on the night and made nine of 10 foul shots to score 37 points.

For Alexander, freshman Nikki Hagy continued her consistent play with nine points and a game-best 14 rebounds.

The ACHS Varsity Men managed to snap a recent three-game losing skid with a 53-40 win over South Caldwell in the final showdown of the night.

Alexander, which improved to 8-9 overall and 4-3 in the NWC, trailed 26-20 at the half. However, the visitors came out hot in the second half, outscoring South 33-14 over the final two periods.

ACHS shot 62 percent (8 for 13) in the second half and finished the game with a 48 percent shooting night on field goal attempts.

The Cougars outscored South 19-11 off the bench.

Senior guard Blan Hodges led the scoring with 14 points on five of nine shooting from the field. Jem Lowrance came off the bench to score a dozen points for Alexander. Lowrance was a perfect eight for eight from the foul line.

After three straight road games, the Cougars will return home to host West Caldwell on Friday night, January 19, in the first game of the second half of the NWC schedule. The JV Men’s game will tip at 4:30 in varsity gym, followed by the varsity games. West Caldwell does not field a JV women’s team.