The Alexander Central High School Fast Pitch Team, which captured the school’s 10th Softball State Championship in June,  will attend the Hickory Crawdads’ baseball game on Friday, August 10, at 7:00 for Alexander County night.  The Crawdads will announce ACHS Softball players as the NCHSAA 2018 3A State Champions.  Chesney Millsaps, who was selected as the NCHSAA State Championship’s Most Valuable Player and West Region Pitcher of the Year,  will be throwing out the first pitch. The Crawdads will be hosting the Lakewood Blue Claws in the game and will hold Superhero Night with the Heroic Adventures Superheroes. 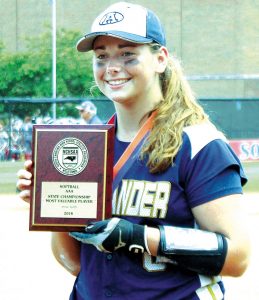 The Crawdads will have group tickets available for $6 that can be purchased for parents, sibling and friends.  Also, $6 meal vouchers are available that include a hotdog, fries or chips and a Pepsi beverage.   Come out and support the ACHS Softball Program and the Hickory Crawdads on Alexander Night at LP Frans Stadium.