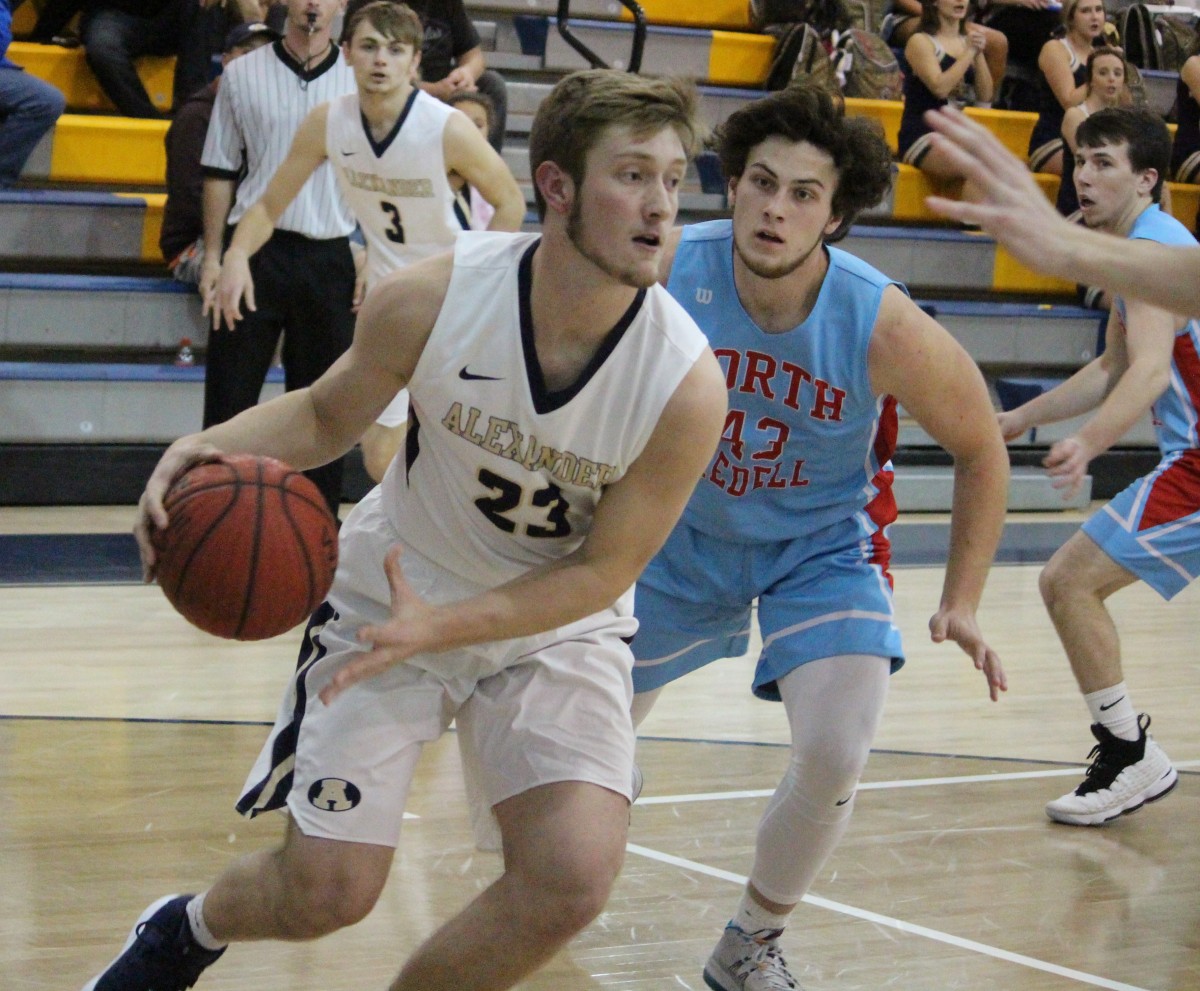 The Alexander Central High School JV and Varsity Basketball Squads opened the 2018-19 season with a home four-pack against the North Iredell Raiders on Wednesday, November 28.

On the day, ACHS finished with a 2-2 record. The two schools split JV action with Alexander winning the girls’ contest and North claiming the men’s game.

In varsity games, North Iredell claimed the win in women’s play, while ACHS grabbed the nightcap in varsity men’s action. 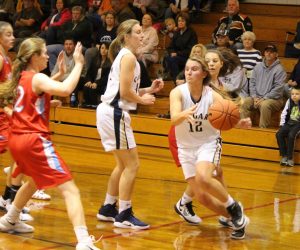 JV Lady Cougar Chesney Stikeleather gets past the North Iredell defense on the way to the basket.

In the JV men’s game, North Iredell outscored the Cougars 24-11 in the second half and cruised to a 41-26 win in the ACHS Junior Varsity gym.

Alexander trailed 17-15 at the intermission. However, the visitors from Olin broke the game open in the second half with its 24-11 run. 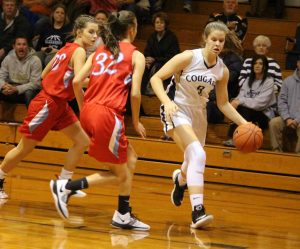 Madeleine Jenkins drives past a pair of Lady Raiders in Wednesday’s JV Women’s game in Taylorsville.

In the opening varsity game of the season for the Alexander Central women, the team hosted one of the strongest teams on its schedule in the Cougar Den.

The North Iredell Lady Cougars, which are coached by Alexander County native Roger Bumgarner, came to town and left with a resounding 66-19 win over the Lady Cougars.

The Lady Raiders ran to a 22-4 lead at the end of the first period and pulled away from that point for  the 47-point win over the home team.

The key to the game was turnovers for the Lady Cougars. Alexander was forced into 35 miscues on the night. North Iredell took advantage of the mistakes, scoring 43 points off Cougar turnovers.

The final game of the day saw the Varsity Cougar Men claim a nine-point win over North Iredell, 56-47.

The Cougars enjoyed a hot shooting night in the win, hitting 51 percent of their shots from the field. Alexander’s defense limited North Iredell to 28 percent shooting.

Alexander Central junior Jem Lowrance opened his second varsity season with a stellar effort offensively. Lowrance hit on eight of 11 shots from the field and finished five of eight from the line for a 24-point evening. The junior forward also led Alexander on the board with seven rebounds.

On Friday, November 30, ACHS will host Davie County for the NCHSAA endowment game. Davie County does not field a JV women’s team. As a result, the Alexander freshmen team will face the Davie freshmen squad in the first game of the day at 4 pm in the JV gym.

Varsity action will tip with the women’s game at 6 pm in the Varsity Cougar Den.

The game is the state’s endowment game. No passes will be allowed except NCHSAA passes and Senior Tarheel Cards. 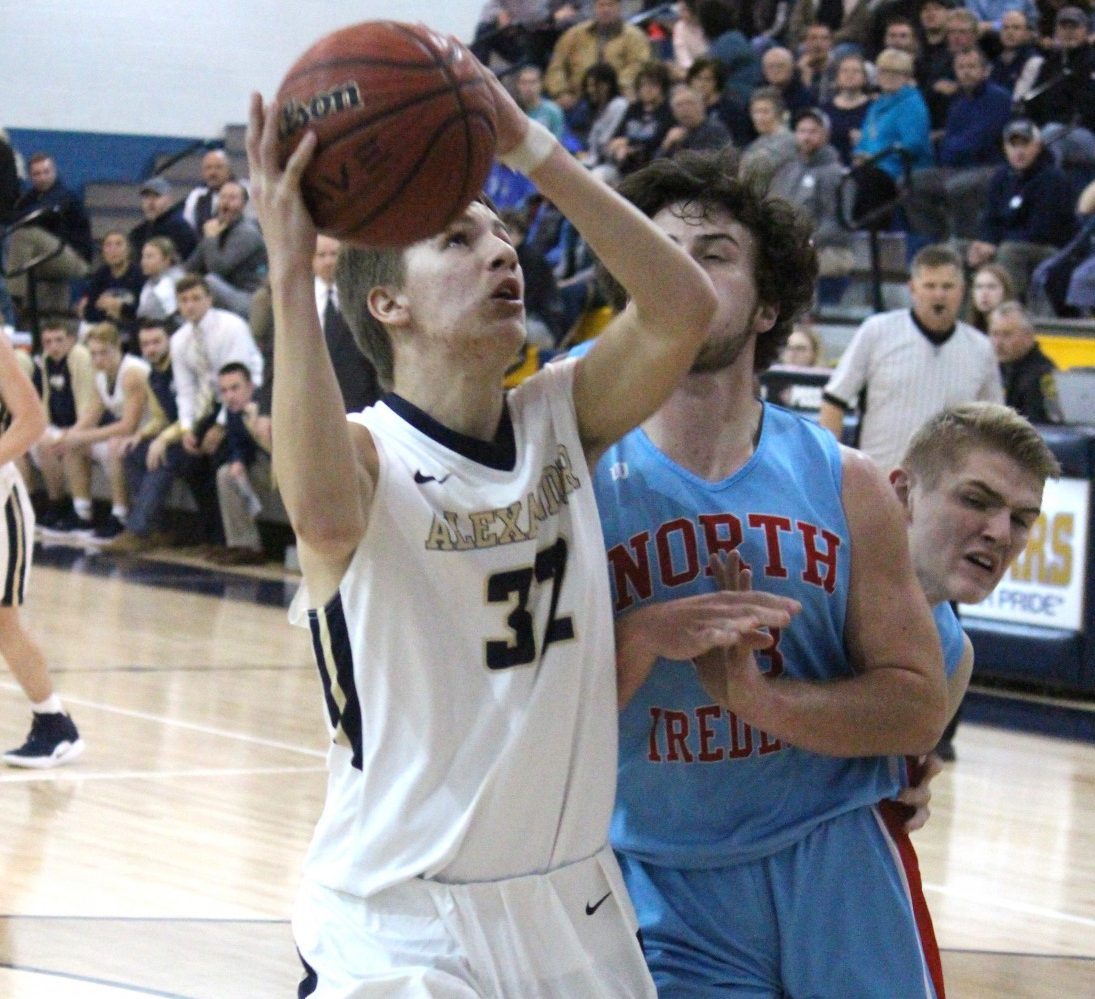 Jem Lowrance gets free on the side for a field goal vs. the Varsity Raider Men in the nightcap.