For the second consecutive season, the NW 3A/4A Conference football coaches have voted Alexander Central’s Isaac Chapman as the league’s Defensive Player of the Year.

Chapman’s award along with the NWC’s All-Conference Teams were announced on Saturday morning, following Watauga’s third-round playoff loss to Weddington. 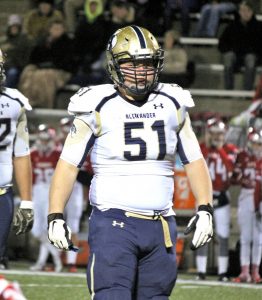 Isaac Chapman has earned NWC Defensive Player of the Year honors for the second straight season.

Chapman and nine of his ACHS teammate were selected to the All-League team after the Cougars’ 8-2 campaign this fall. ACHS finished third in the league behind Watauga and Freedom.

This season, Chapman led the Cougars in tackles for loss and sacks. In addition to being a two-time winner of the league’s top defender award, the defensive lineman has been selected to play in the Shrine Bowl of the Carolinas later this month in Spartanburg, SC. He will also represent ACHS in the Blue/Gray Bowl in Tampa, Florida in January.