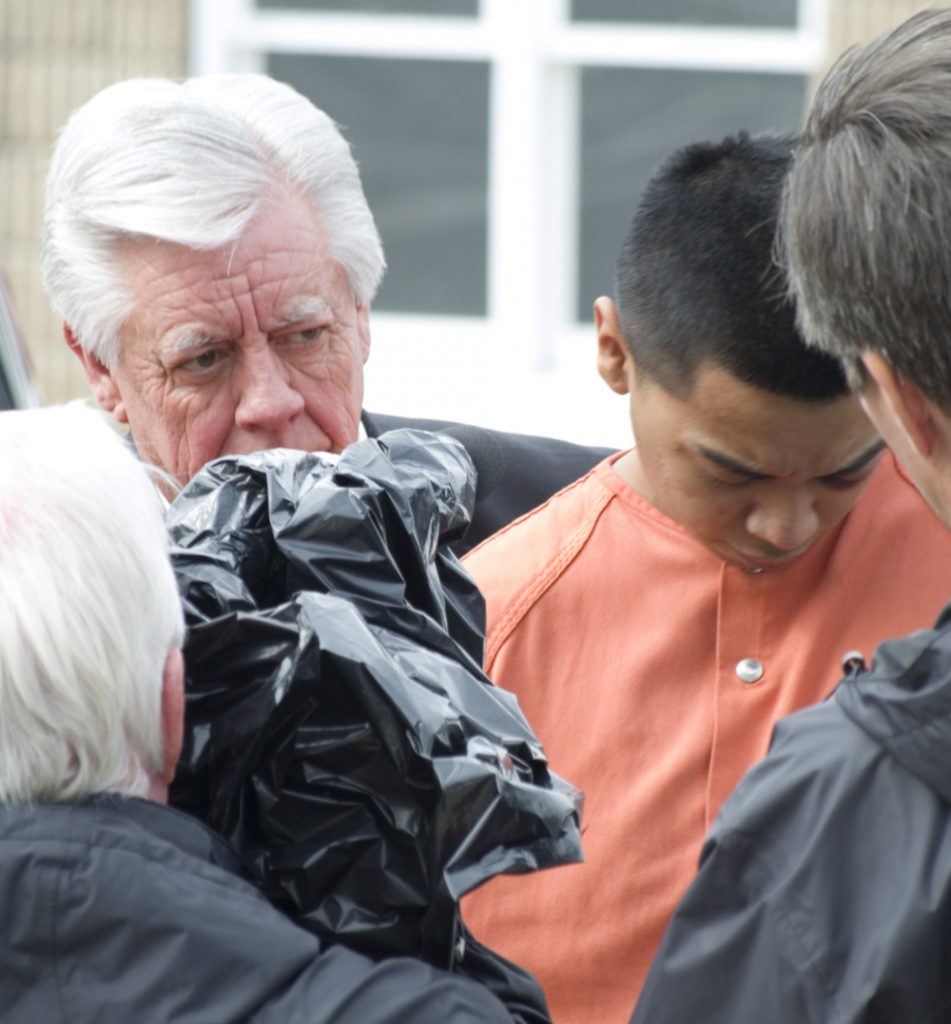 A Taylorsville man was killed at a home in Stony Point over the weekend, and officers have a suspect in custody. This is the third killing for both the Stony Point Community and Alexander County as a whole this year, according to Sheriff Chris Bowman.

Officers responded to a residence located on Middle Road in the Stony Point Community. When they arrived on the scene, officers found Blade McKinley Campbell, age 23 of Taylorsville, deceased from multiple gunshot wounds.

It is believed that Mr. Campbell and Antonio Castillo, age 22 of Stony Point, were in an altercation when Castillo pulled a pistol and shot Campbell. 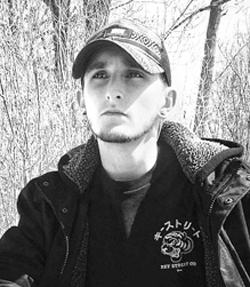 The Sheriff said that Castillo had gone to the home where Castillo’s ex-girlfriend, Keri Arnett, and her new boyfriend, Campbell, were located. Arnett’s nine-month-old baby was also at the residence at the time of the shooting. Bowman was not certain if Castillo is father of the child.

A Be On the Look Out for Antonio Castillo was immediately put out for his arrest. Castillo was believed to be traveling in a 2006 Nissan Altima, dark in color. At approximately 4:00 p.m. Sunday, the vehicle was located on Pierpoint Lane in Taylorsville. However, Castillo was not located with the vehicle. 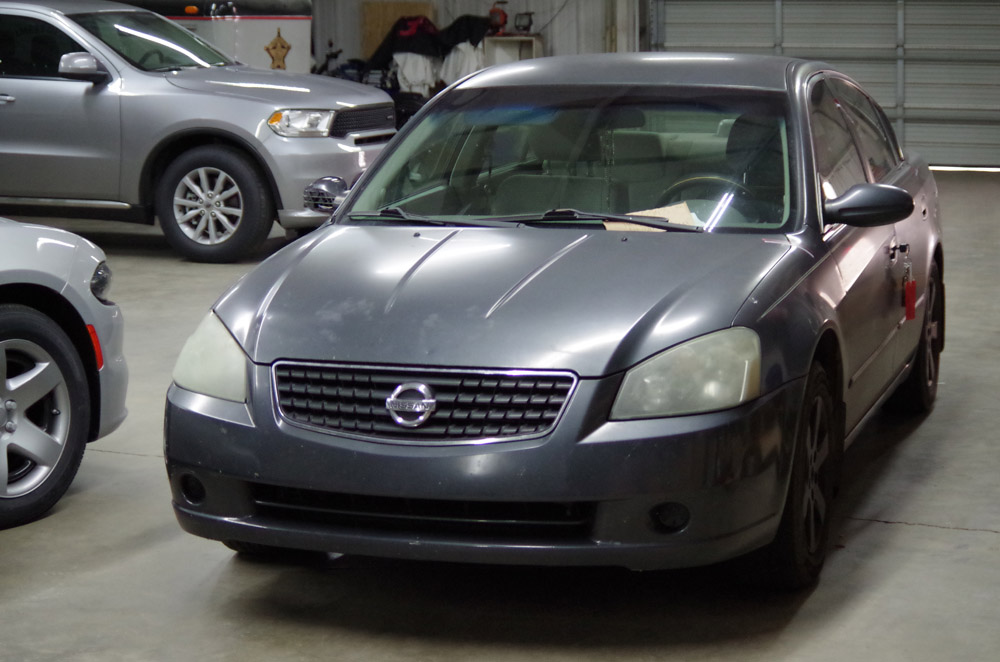 Authorities believe Castillo left the scene of the shooting in this Nissan car. It was later found on Pierpoint Lane in Taylorsville.

At approximately 4:20 p.m., officers located Castillo at a residence on Jessica Lee Lane (across from Pierpoint Lane) in Taylorsville. Officers approached the residence. Castillo began running through a field. Officers gave chase and arrested Castillo. Officers located two bags on Castillo, containing an AR-15 along with numerous rounds of ammunition.

“Three or four officers gave chase, and chased him down,” the Sheriff said. “He was running toward the woods. It is my feeling that, if he had gotten into the woods, with this AR-15 and multiple rounds of ammunition that he had… we feel like it would have been big trouble.” 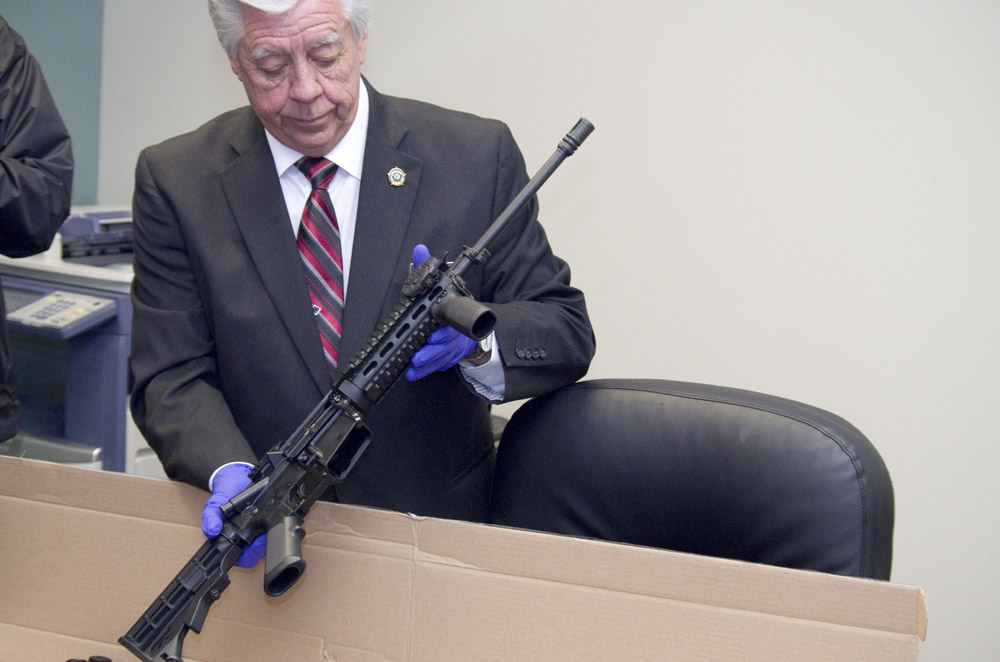 Sheriff Bowman examines the rifle that was found on Castillo at the time of his arrest. 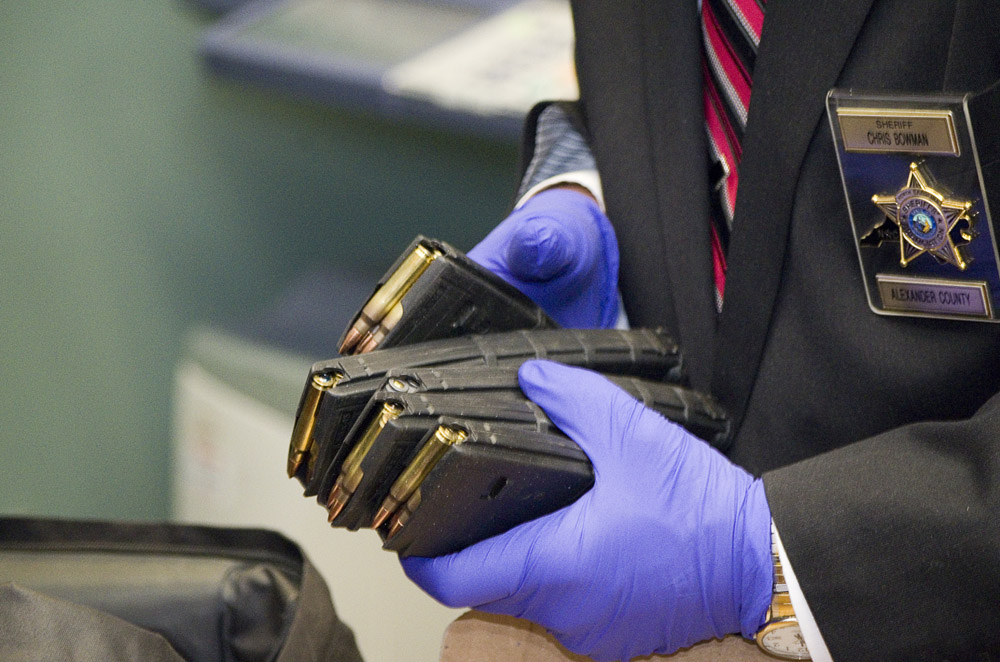 Castillo had these five loaded magazines and the rifle with him when authorities arrested him.

The AR-15 was not the weapon used in the incident, said Sheriff Bowman. A handgun is believed to have been used to shoot Campbell.

Castillo is charged with Murder and is currently being held in the Alexander County Detention Center under no bond.

Sheriff Bowman said the Grand Jury will decide next month whether or not to return a true bill of indictment in the case against Castillo, to move the case into Superior Court.

As he was brought into the Alexander County Courthouse on Monday, March 25, 2019, Castillo told reporters his action Sunday “was self-defense,” as he was led from a patrol car to the court facility for his first appearance on this charge.

It was observed that Castillo had a black eye as he walked into court on March 25. When Bowman was asked if that lent credence to Castillo’s claim of self-defense, the Sheriff said he believed the injury came from Castillo’s altercation with Campbell, but stated, “To me, that doesn’t give a person the right to use deadly force.”

“We didn’t find any evidence of any other weapon there at the deceased [man],” said Bowman.

The Sheriff added that, if Castillo acted in self-defense, he would have expected Castillo to wait on authorities to arrive — not run from the scene.

“From the time of the call to the time we took him in custody was approximately four and a half to five hours,” Bowman said.

At last report, the murder weapon used in this incident has not been located.

Bowman was asked about the three homicides this year all involving people in their 20s or 30s wielding firearms.

“It just seems like it’s this age, generation. It seems like if they have altercations, they have to have a weapon, firearm of some sort, with them, to try to settle it. And that’s the wrong way to do it,” said Bowman.

Sheriff Bowman refused to issue a pistol purchase permit to Castillo last year. “After doing some background on him and his record, at the time I felt like it was the right decision for me to make, not to issue a purchase permit,” Bowman said.

Authorities are working to determine what the murder weapon is, and how it was obtained.

A candlelight vigil will be held Friday, March 29, 2019, at 7:30 p.m. to honor the life of the late Blade McKinley Campbell, at 290 Tom Kerley Lane, Moravian Falls (Vashti Community), according to Justin Campbell, uncle of the deceased.