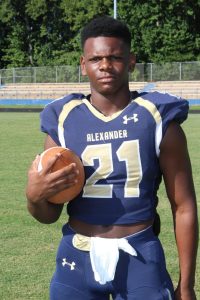 The young Cougars trailed 12-6 at the half but outscored the home team 18-0 in the second half to claim a 24-12 win. With the victory, Alexander improved to 4-0 on the 2019 season and ran the school’s win streak to 36 consecutive games.

ACHS closes the non-league schedule with its perfect 4-0 record and will enjoy an open date on Thursday, September 26. The team will return to action with a road game at Watauga High School in Boone on Thursday, October 3, at 6:30 pm.

In Thursday’s win, sophomore Cam Lackey enjoyed another fine game rushing the football. The Cougars’ featured back finished with 14 carries for 168 yards rushing. He finished with two touchdowns, scoring on runs of 45 and 35 yards.

Caleb Williams finished with 49 rushing yards and one TD on a 10-yard run to the end zone. Andrew Bumgarner also scored one touchdown, reaching pay dirt on a 19-yard scoring reception.

On the night, the Cougars tallied 310 yards on offense, while holding the Trojans to just 75 total yards.

Bumgarner, Dalton Beck, and Landon Wike paced the ACHS defense with four tackles apiece. Beck had a pass interception for the Cougars, while Preston Hudson led the team with two tackles for loss.