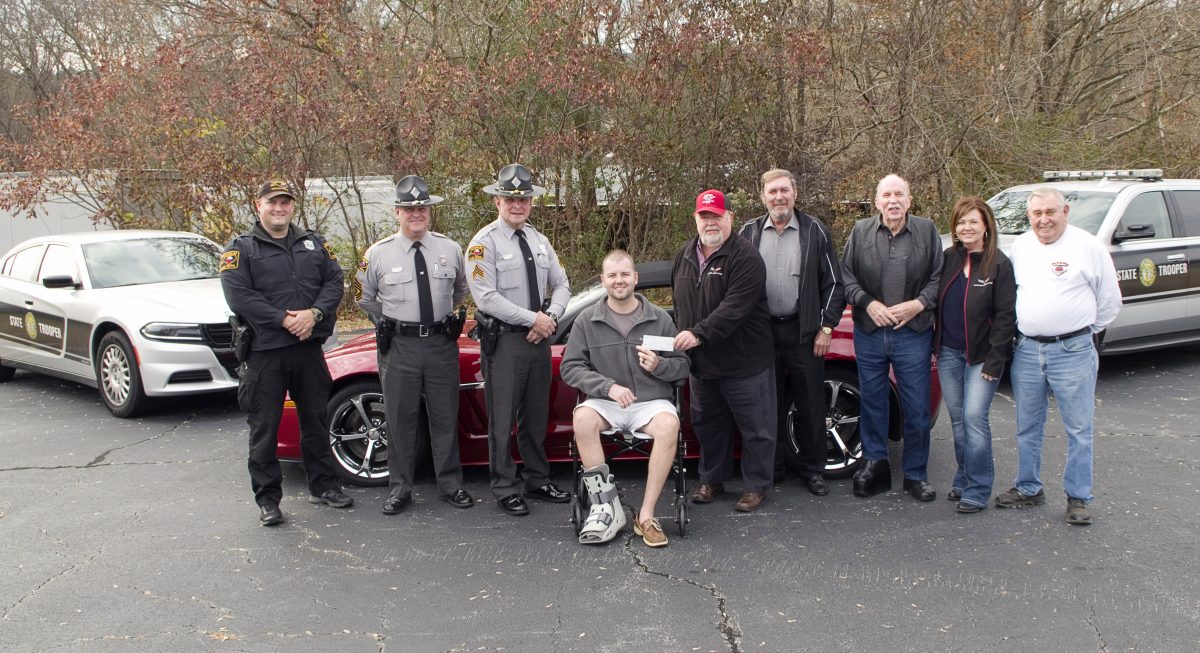 CORVETTE CLUB DONATION ASSISTS WILKES TROOPER — Caring people on both sides of the Brushies have responded with support for N.C. State Trooper Jonathan (J.G.) Barnes, age 31 of Wilkesboro, who was severely injured on September 15, 2019, when a vehicle hit him head-on in southeastern Wilkes County. Barnes has been employed with the N.C. State Highway Patrol for five years. Trooper Barnes is out on leave, still recuperating at home, and taking physical therapy after surgeries to repair a broken knee, foot, left shoulder, and wrist. He and his wife, Kayla, are newlyweds, married October 2. Members of the Foothills Corvette Club held a “Run to the Colors” fall event recently as a fundraiser. The ride had approximately 150 Corvettes from both Carolinas, Virginia, and even Pennsylvania. The club presented a $500 check and an anonymous Statesville man’s donation of several hundred dollars in cash to Barnes on Tuesday, November 19, at the N.C. State Highway Patrol Office in Wilkesboro. Pictured above, left to right: Trooper R.V. McGee, First Sgt. G.E. Rhew, Sgt. W.A. Martin, Trooper J.G. Barnes, Foothills Corvette Club President Kendall Hendrix (of Wilkes County), club members Larry Price and Harold Mecimore (of Alexander County), Derry Hendrix, and Sam Miller (both of Wilkes). According to the Wilkes Journal-Patriot, an account has also been set up at State Employees Credit Union (SECU) in Barnes’ name to donate money to help Barnes. The account number is 62533721, and a donation may be made at any SECU in the state.