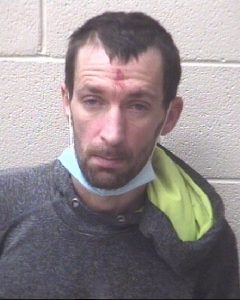 A Hiddenite man has died and a Taylorsville man has been charged in an impaired driving crash over the weekend near Taylorsville.

On Saturday, January 9, 2021, at approximately 7:10 p.m., the NC State Highway Patrol responded to and investigated a fatal collision in Alexander County on Church Road near Sipe Road, according to Jeffrey S. Swagger, Master Trooper with the North Carolina State Highway Patrol. A 2011 Ford Escape was traveling north on Church Road, ran off the road to the right, and overturned several times.  The driver, Steven Ray Transeau, 33, of Taylorsville, received minor injuries.

The passenger, Joseph Frank Menscer, 44, of Hiddenite, was not wearing a seatbelt and was ejected. He succumbed to his injuries at the scene.

Transeau was arrested and charged with felony death by vehicle, driving while impaired, and driving while license revoked.  The results of a blood test are pending, said Trooper Swagger.