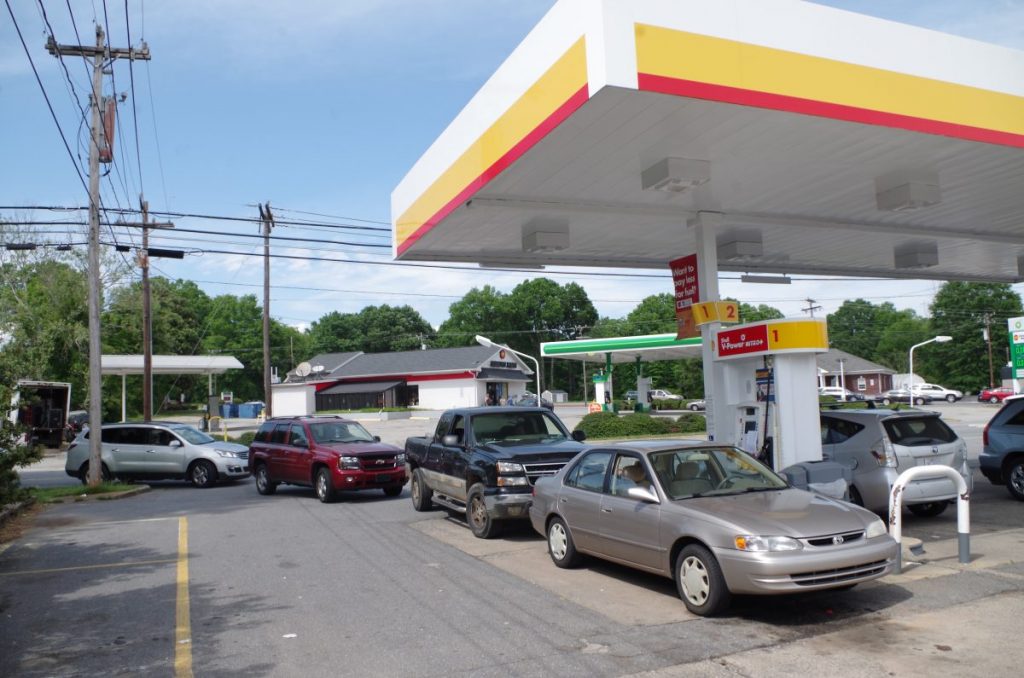 SHORTAGES, OUTAGES HIT TAYLORSVILLE GAS STATIONS — Multiple gasoline stations in Taylorsville were either out of gasoline, or out of certain grades of gas, on Tuesday, May 11, as panic buying and shortages from the Colonial Pipeline cyber-attack caused stations to go dry. At Market Basket #3 in Taylorsville’s West End (above), only Super 93 gas was left for customers to purchase on Tuesday afternoon.

Cars were several deep in line at Market Basket #3 Tuesday afternoon, with some vehicles waiting in line in NC 90 to get into the station.

One assistant mentioned that she had an angry person throw a bottle at her head when she tried to explain that the station was out of regular gasoline.

The store had run out of regular grade before 10 a.m. Tuesday, and thus had no fuel to mix with Super (93 octane) to make mid-grade (89 octane), leaving only the Super grade for sale.
Signs at Market Basket #4 across from the Old Hospital noted that all the pumps were out of fuel.

Quality Mart at West End appeared to have no gasoline and no customers at the fuel pumps. Its electronic price sign displayed $0.00 for all grades.

Several vehicles were lined up buying gas at the Murphy filling station at Walmart on Tuesday afternoon.

In response to the temporary shutdown of the Colonial Pipeline, Governor Roy Cooper on Monday, May 10, signed an Executive Order declaring a state of emergency in North Carolina and temporarily suspending motor vehicle fuel regulations to ensure adequate fuel supply supplies throughout the state.

“Today’s emergency declaration will help North Carolina prepare for any potential motor vehicle fuel supply interruptions across the state and ensure motorists are able to have access to fuel,” said Governor Cooper on Monday.

The Order received concurrence from the Council of State.

North Carolina’s price gouging law is in effect after Gov. Roy Cooper declared the state of emergency in response to the temporary shutdown of the Colonial Pipeline.

“The hackers who breached Colonial Pipeline’s systems have made it harder for hardworking North Carolinians to go about their lives, but I will not allow businesses to take advantage of this incident to charge excessive prices,” said Attorney General Josh Stein. “North Carolina’s price gouging law is in effect – please let my office know if businesses or people might be trying to profit off this situation so we can hold them accountable.”

North Carolina’s law against price gouging, or charging too much in times of a crisis, goes into effect when the governor declares a state of emergency. In some cases, businesses and industries that are heavily impacted by the incident causing the state of emergency have a reasonable need to increase prices in order to resupply, but they should disclose these increases and allow people to make informed purchasing decisions. Businesses cannot, however, unreasonably raise the price of goods or services to profit from a state of emergency.

Governor Roy Cooper announced May 12, 2021, at 5:59 p.m. that “Colonial Pipeline has just initiated a restart of its pipeline operations which is good news for North Carolina. We will continue to work with federal and local officials to strengthen our fuel distribution as we move forward. This news is another reason people do not need to panic buy gas right now unless they really need it.”