Over 5,200 weeks — and as many weekly editions — have passed since two Lincolnton men, Jonathan M. and J.W. Mullen, purchased The Mountain Scout newspaper here and renamed it The Taylorsville Times in the latter half of 1921.

This week, The Times brings you a peek into that century of Times’ news coverage. This special, six-section commemorative edition, printed on High-Bright paper which is resistant to yellowing and fading, is included in the Dec. 8 issue. Inside, Times’ staff have taken a few issues from each decade during the 1921 to 2021 period to highlight local news and advertising of the time.
Also inside, readers will find interviews with current and former Times’ staff members, local leaders, and community members who comment on what The Times has meant in their lives.

Even though this is a brief snapshot of the century — there were well over 100,000 pages of Times issues to choose from, we hope this will be helpful as a glimpse into the past. The coverage starts with the Roaring Twenties, back when a Ford Model T, in mass production, could be bought for the cost of about four months’ salary. The car analogy is just one way the past 100 years have brought amazing changes, from Ford’s 1922 announcement of enclosed cars, up to today’s cars and trucks with collision warning, accident avoidance braking, blind spot detection, and more technology.

Articles and ads reflect a century of change across Alexander County and America itself: rural electrification, the austerity of the Great Depression, World War II, the post-war economic and baby boom, community development of the 1960s and 1970s, manufacturing growth in the 1980s and 1990s, and the computer and internet age and the dawn of the 21st Century.

“We appreciate the opportunity to serve the people and are thankful for the support of the community during the past one hundred years,” said Times publisher, Lee Sharpe. “We are privileged to have chronicled one hundred years’ worth of Alexander County history and its remarkable people.”

What do you remember from The Times past? Take the journey in our Dec. 8 issue, with the 100th Anniversary Special Edition in six sections, A through F. 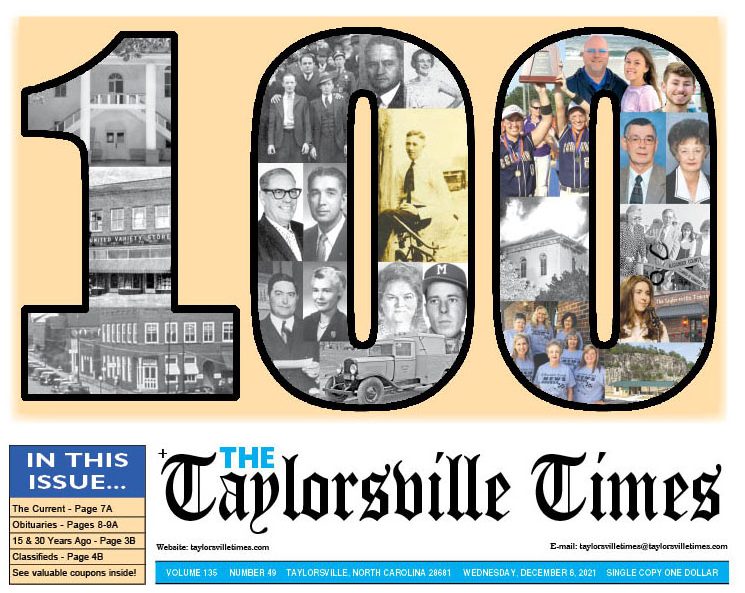