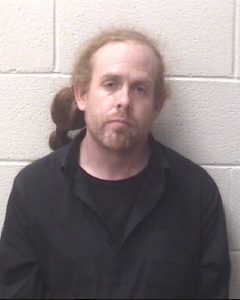 A desperate local man is accused of leading officers on a nighttime car chase and, once his own car was disabled, stealing a patrol car and crashing into another patrol car, injuring an officer, before fleeing on foot in a churchyard and being apprehended a short distance away.

On Friday, December 17, 2021, at approximately 2:30 a.m. Alexander County Sheriff’s Office deputies observed a blue Ford Explorer traveling through the Town of Taylorsville at a high rate of speed. The suspect vehicle then ran a stop sign, continuing to travel west on NC Hwy. 90, according to Sheriff Chris Bowman.

At that point, the deputy discharged his service weapon in an attempt to stop the threat created by the suspect having access to county-issued weapons inside the vehicle. The suspect continued fleeing in the patrol vehicle approximately half a mile, with other deputies still in pursuit. The suspect turned into the parking at Antioch Baptist Church and back out onto the roadway, traveling east on Antioch Church Road. The suspect drove into the westbound lane, ramming into a pursuing deputy vehicle. This action disabled both the patrol car he stole and the pursuing deputy’s patrol car.

The suspect exited the stolen patrol vehicle, while other law enforcement officers arrived on scene and began giving verbal commands. The suspect failed to comply with commands from law enforcement. Tasers were deployed but were unsuccessful.

The suspect began to flee on foot through the graveyard of Antioch Baptist Church. Deputies began to chase the subject on foot, but realized the deputy involved in the ramming of his patrol car collapsed to the ground with a head injury. While deputies aided the collapsed officer, officers with the Taylorsville Police Department continued pursuing the suspect. The suspect was apprehended a short distance later.

The injured deputy was transported by Alexander County EMS to a local hospital in Catawba County with non-life threatening injuries.

Suspect is identified as Tony Timothy Martin, said Sheriff Bowman. He is a white male, age 35, of Taylorsville.