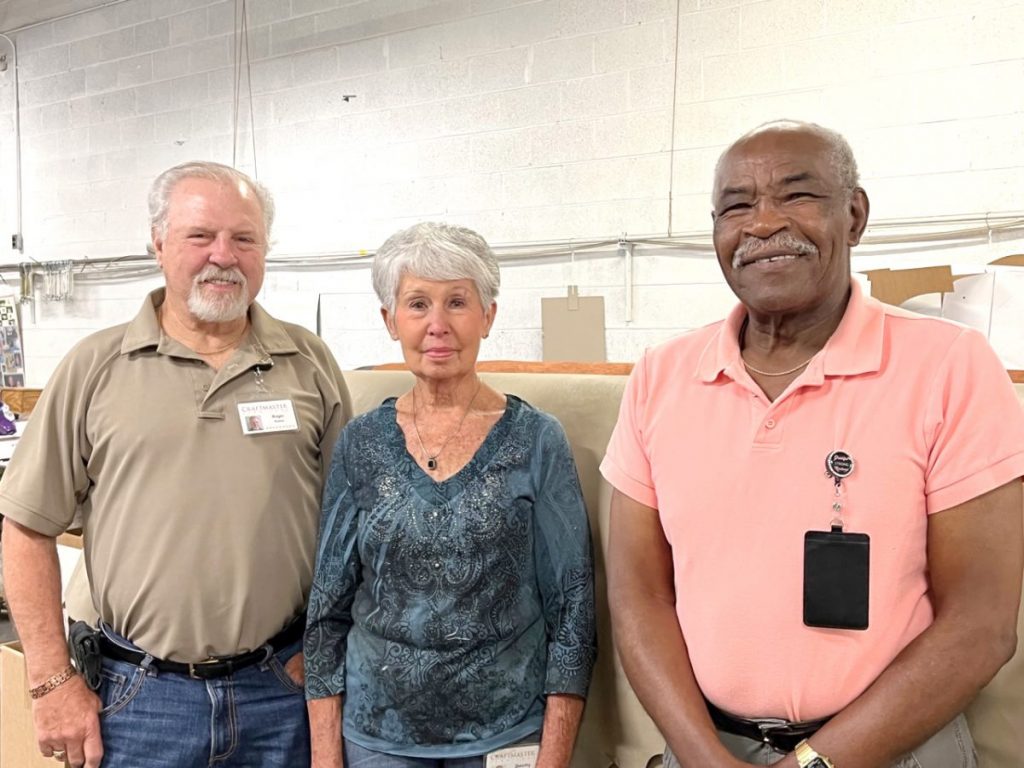 CRAFTMASTER’S LONGEST TENURED ASSOCIATES — Craftmaster Furniture has hundreds of loyal, hard-working associates, but none have been with the company longer than these three. Roger Adams (left) and John Miller (right) have worked with Craftmaster since the company’s founding in 1972; Dorothy Crouch joined in 1973. (Craftmaster photo.)

For five decades, the local company Craftmaster Furniture has produced quality upholstered sofas and chairs. The company management and employees recently marked the milestone with a 50th anniversary celebration, said CEO Roy Calcagne, including with associates who have been at the company the entire half century. 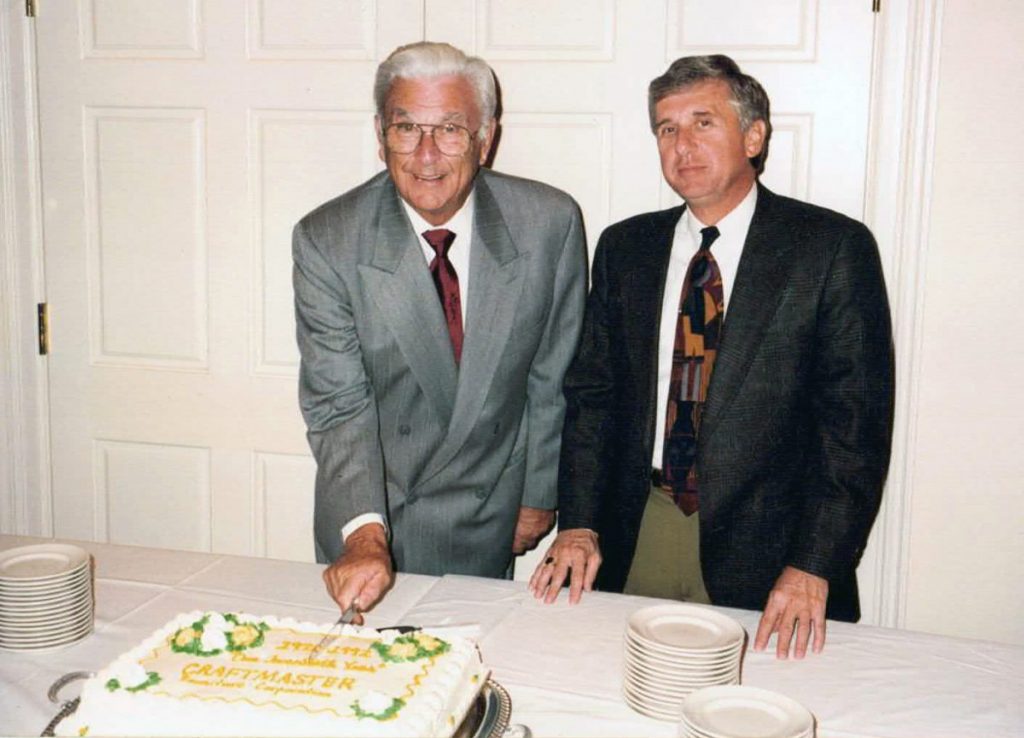 FOUNDERS — Jack Stokes (left) and Steve Lackey began Craftmaster Furniture in a small building in Taylorsville in 1972. From a handful of family members and friends, the company has grown to employ over 750 associates today.

He noted that Craftmaster was incorporated June 15, 1972, by Steve Lackey and Jack Stokes. When it began, Craftmaster started in the former Irene Mills building in Taylorsville, then moved to Hiddenite in 1973. The company began with a handful of friends and family that had worked in upholstery manufacturing locally. The ownership also included a few salesmen based in the Southeast that would take the products on the road and sell to small furniture retailers in the surrounding states. 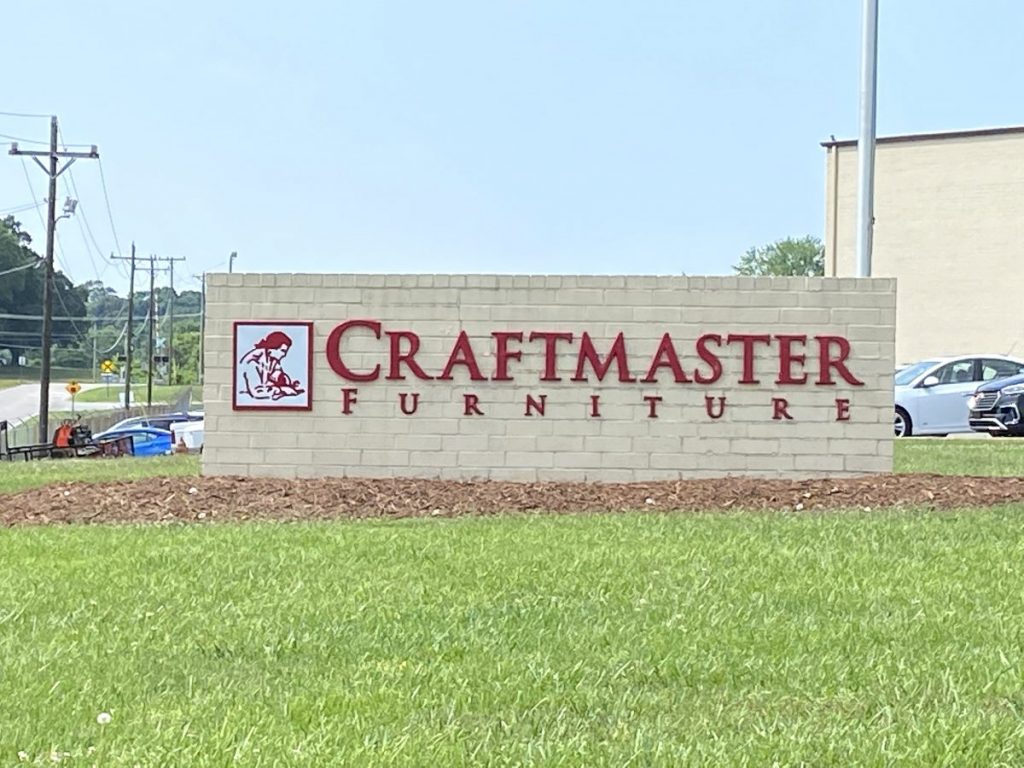 Over the years the company had grown to employ over 400 Associates and become well known for high quality, stylish, well priced upholstered furniture. In 2006 Samson Holdings purchased the company to add to its stable of brands that included Legacy Classic and Universal Furniture.

The plan for Samson was to enter the upholstered furniture market in a big way and expand their footprint in the home furnishings segment. Roy Calcagne was appointed President/CEO of the company that year with the goal of expanding distribution and the product offerings. The company has doubled in revenue since that time and now employs over 750 Associates building high quality upholstery with 1,000,000 square feet of manufacturing space in western N.C. 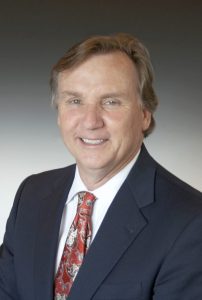 Three associates have been at the company basically from the beginning. Roger Adams and John Miller have worked in product development together all of these years and Dorothy Crouch, sewing supervisor and instructor, has been with the company since October of 1973. All three reside in Taylorsville.

Adams and Miller helped to build some of the first samples to ship to stores from the company’s first sofa line, the model #4190.

Miller recalled being approached to come to Craftmaster by Jack Stokes.

“I thought about it and prayed about it,” Miller said, and agreed to help the new company. He began working with manager Larry Chapman and Harold Bentley. Miller had worked in furniture previously at Deville Furniture and was asked to help at the fledgling Craftmaster in an assistant manager position.

“I like building furniture and seeing it come together. Some of it’s been a challenge, but I’ve never been one to run from job to job,” Miller related. In fact, other members of Miller’s family have also worked with Craftmaster during his tenure there.

Adams said he also worked in furniture previous to joining Craftmaster in its first year and had about ten years prior experience in the field. He started as an upholsterer at Craftmaster for the first 18 months or so, but was offered a chance to work in the product development area of the company, where he continues today.

“It’s a challenge. I like it or I wouldn’t have been here this long! I have good friends here. They are good people to work with,” Adams related.

Crouch worked previously at Bassett in Newton for nine years, then came to Craftmaster in its second year of operation, sewing fabric for samples.

The company’s first 1972 sofa help get things moving in the right direction and it was only fitting to pay tribute to the sofa which helped start it all.

“We replicated this same sofa 50 years later and will show it at the upcoming October furniture market,” said Calcagne.

Employees showed The Times the replica 1972 sofa and pointed out its differences from modern upholstered items the company makes today. Back then, the seating was much softer (you had a “sink down in it” feeling) with Dacron poly cushions 5 inches thick — and sofas were sewed with skirts around the bottom. Now, improved foam cushions even have springs inside for a firmer but comfortable seating experience.

Roy Bearden, VP of Manufacturing at Craftmaster, explained the improvements in manufacturing and materials used by the company now.

“I remember when my grandmother had a sofa with feather pillows, feather stuffing, and it was all cotton fabric,” Bearden said. “Now, we use manmade, stain resistant materials for longer wear.”
Associates went from lifting furniture pieces by hand to automatic lifts to manuver the pieces while working on them. In early days, rows of brass nails were installed by hand with a hammer. Now, associates use pneumatic guns to hammer in nails, framing staples, and wide crown staples, thus being able to complete a piece more efficiently.

They work in brightly lit and air conditioned plants, a great improvement over the early days. And they continue to innovate and bring customer-pleasing products to stores.

Fifty years ago, sofa and chair frames were made of hardwood, joined with dowel pins — which had a tendency to shear if the pieces were handled roughly in shipping. Today, Craftmaster uses engineered hardwood plywood frames for enhanced durability and lighter weight.

“We keep improving and keep working to have a better product,” said Adams.

“The sectional [sofa] side of the business was new 16 years ago. We started a line in one plant,” said Bearden. “But now, every plant runs some sectionals. People are looking for more casual furniture today than in years past.”

During COVID, the company took the opportunity to open a plant in Lenoir to help add capacity to manufacturing and reduce its sales backlog, taking steps to remain a good market position.

Bearden pointed out that Calcagne is over merchandising and is President and CEO of the company overall. Chief Operating Officer Kevin Mann works to keep supply chains coming to the company. Beth Propst works to recuit and retain employees as VP of Human Resources. Bearden himself is Senior Vice President of Manufacturing.

Bearden expressed his appreciation for company leadership’s involvement in the community, from donating to local food pantries to supporting sports teams to assisting the Alexander Furniture Academy at Catawba Valley Community College in Taylorsville.

“The CVCC facility in Taylorsville was a vacant apparel finishing plant. Now it offers industrial maintenance, training for upholstering and sewing, the Alexander Early College, and other employee training. It’s a great example of what can happen with cooperation of local government, companies, and the community college,” Bearden said.

“The fact that we have survived and strived for 50 years in Alexander County is amazing. So many others have gone out of business,” Calcagne stated.

“Our goal is the same as it was 50 years ago, developed by our founders, Steve and Jack. It was to build the best quality products that are affordable yet fashion forward and comfortable,” he said.

“We have become known for having a great fabric selection with over 800 choices available on 75 different collections and accent pieces. I am very proud to have been part of this great company for the past 16 years and to be able to work with a team of professionals that are second to none,” Calcagne added.

In early June, Craftmaster served lunch to all 750 associates in its employ and gave out t-shirts marking the anniversary.

To find out how to join the Craftmaster team, email careers@cmfurniture.com or drop by their Hiddenite location’s Human Resources office. 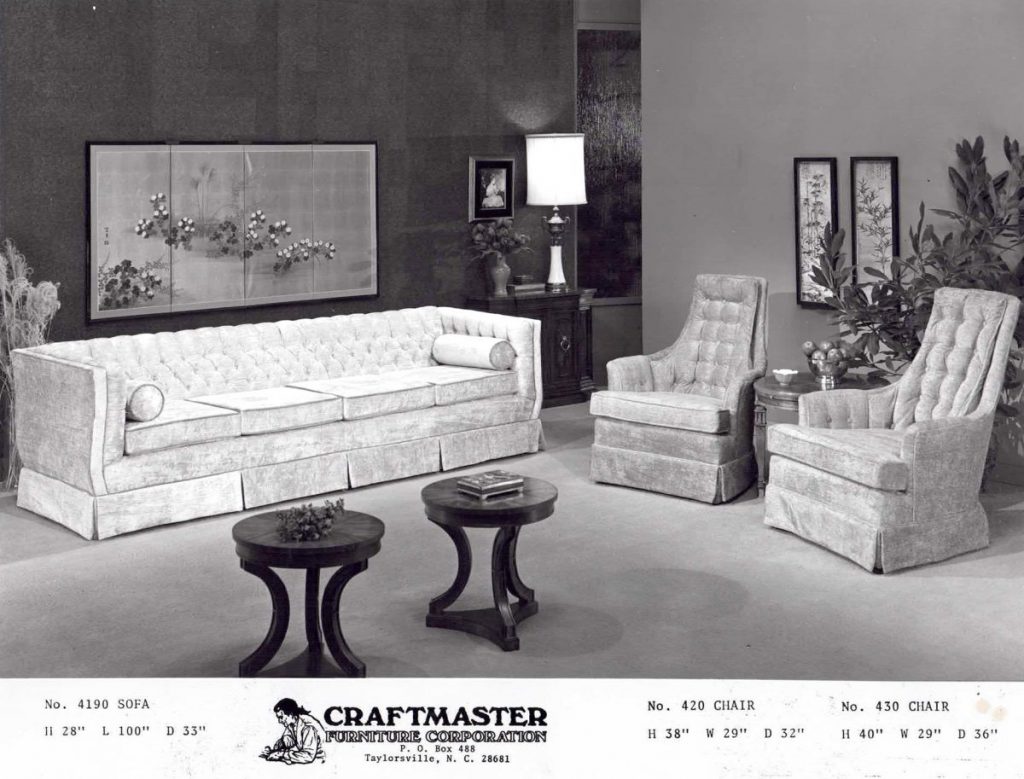 1972 STYLE — This tufted sofa, model No. 4190, is from the 1972 offerings by Craftmaster, their first year. The sofa’s cost: $112.50 each. To celebrate the company’s fiftieth anniversary, Craftmaster recreated this sofa and chair set for display at the upcoming October furniture market. 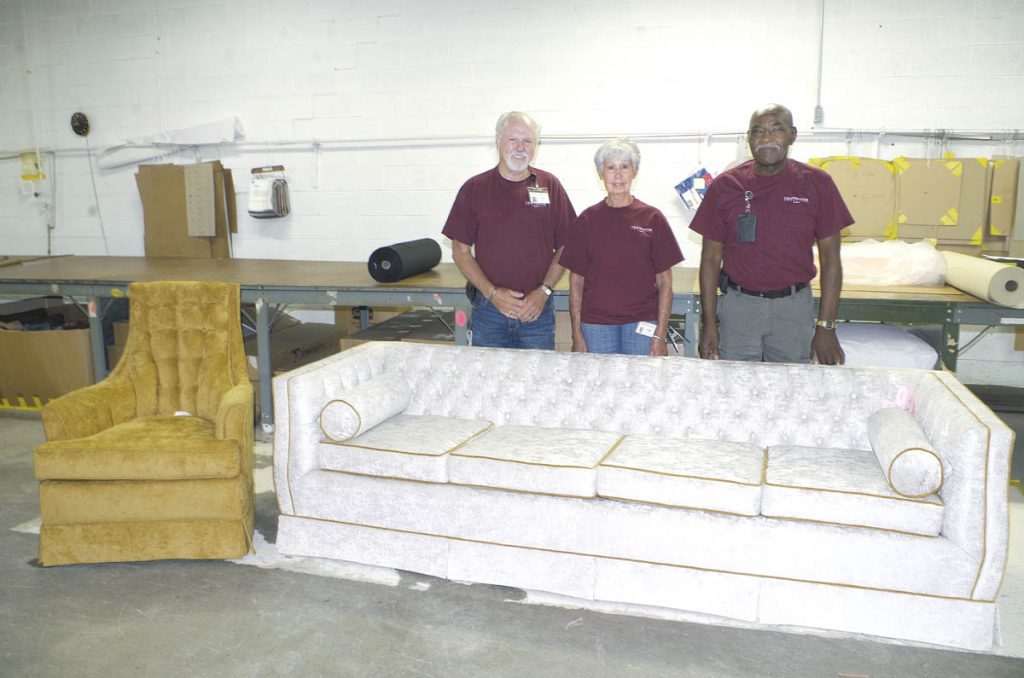 REMAKING THE PAST — To celebrate Craftmaster’s fiftieth anniversary, associates recreated the 1972 No. 4190 sofa and No. 420 and No. 430 chair set for display at the upcoming October furniture market. Shown above, left to right: Roger Adams, Dorothy Crouch, and John Miller. 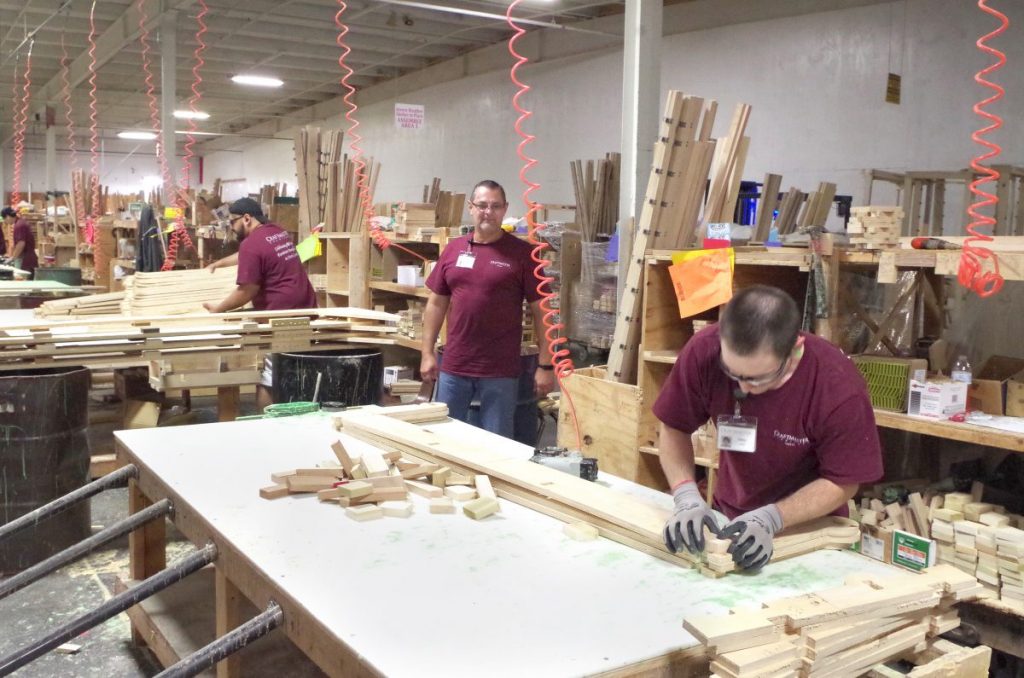 FRAMING — Above, Rick Earp (center) is a supervisor in Craftmaster’s framing shop in Hiddenite. He is shown with associates Hector Gutierrez (left) and Casey Dixon (right). 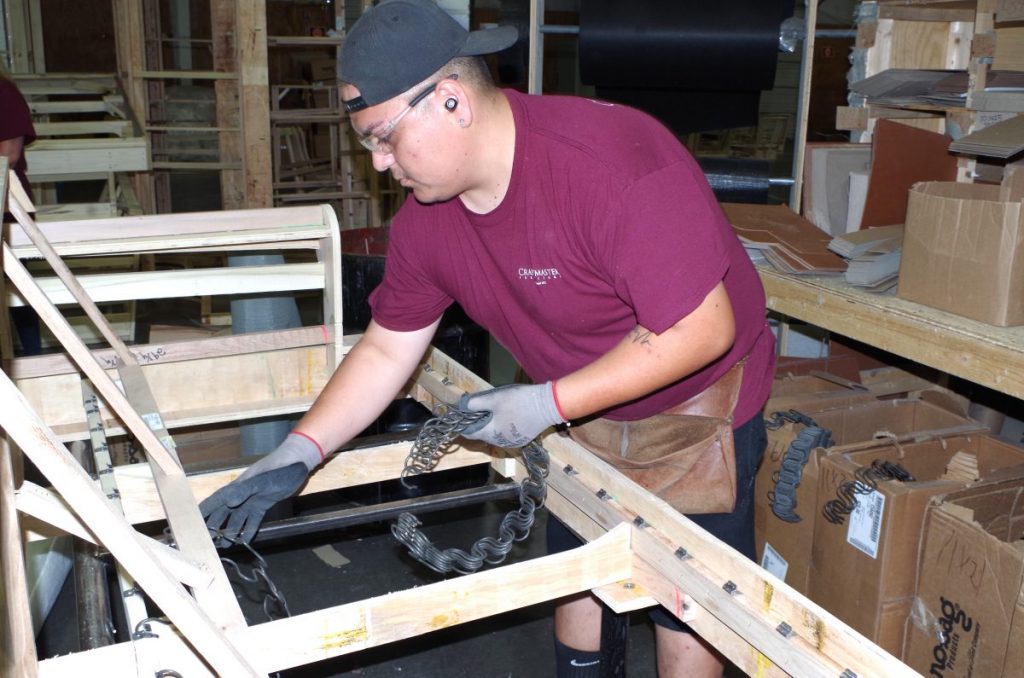 ADDING THE SPRINGS — Once the furniture frames are assembled, then springs are installed. Above, Michael Chavez adds springs to a frame in Craftmaster’s framing shop in Hiddenite. 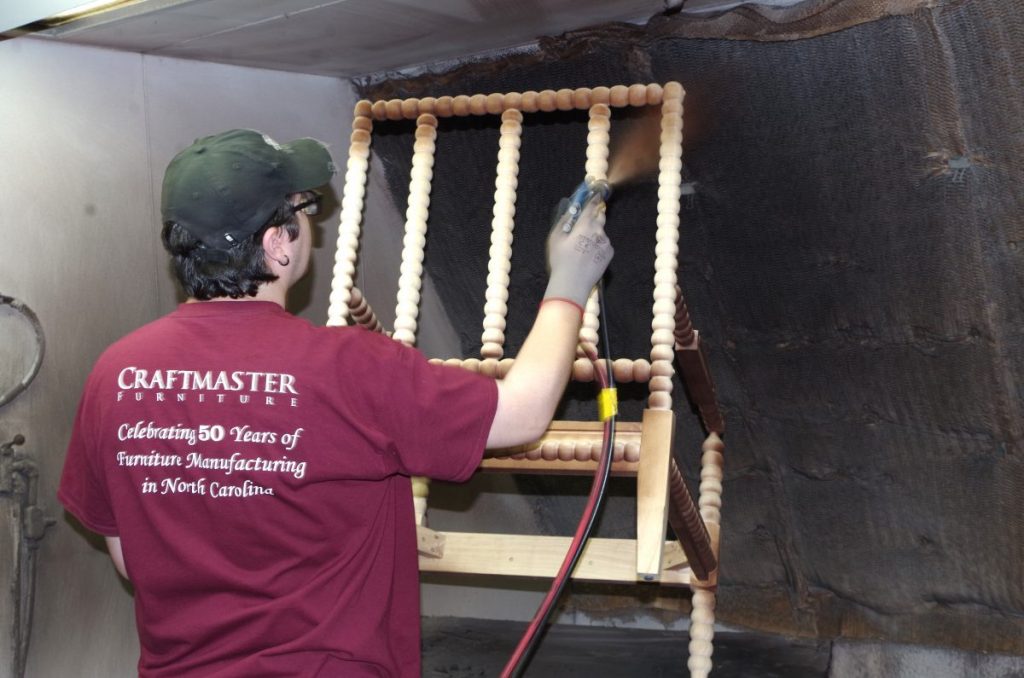 APPLYING WOOD STAIN — Here, Dakota Lail sprays stain onto the wooden surfaces of a chair frame at Craftmaster in Hiddenite. 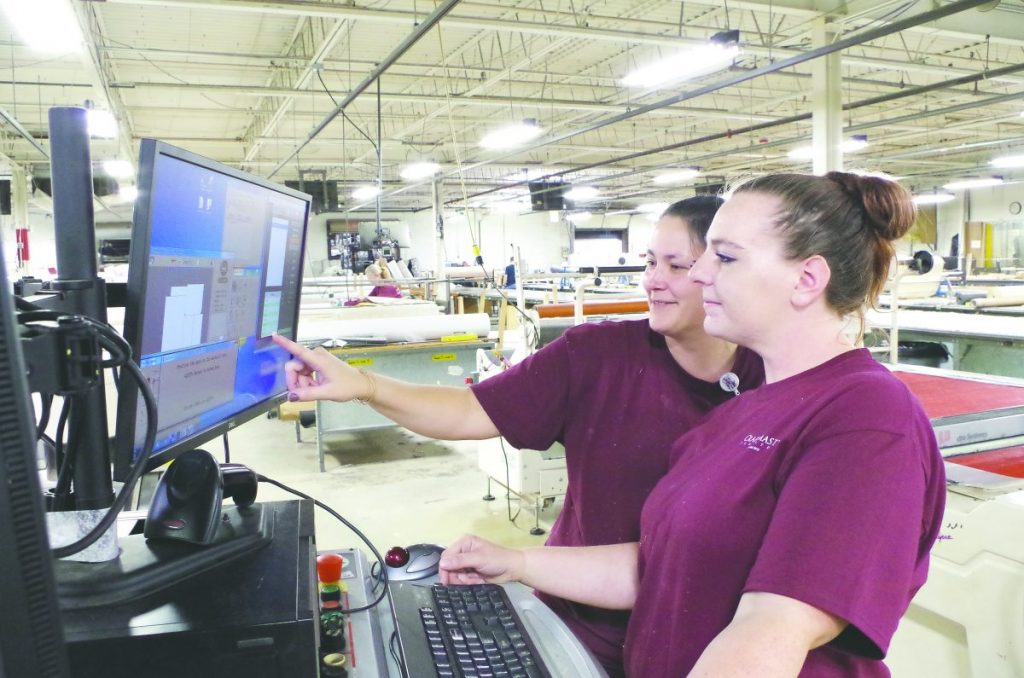 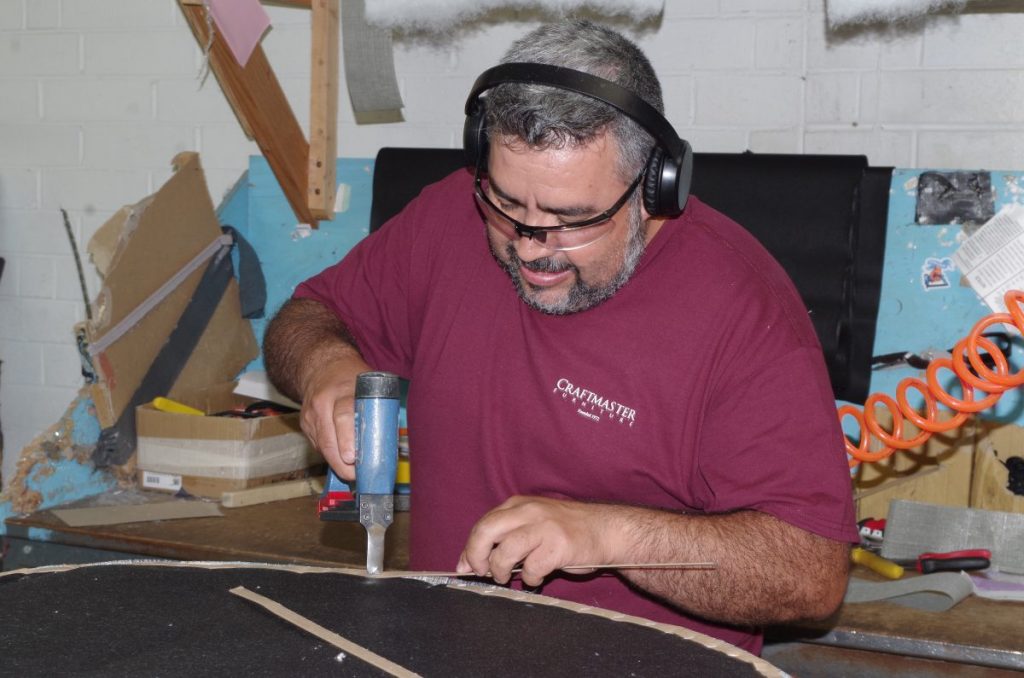 FINISHING — As assembly continues, the fabric pieces are trimmed (fastened) in place with strips, as Ismael Sanchez demonstrates. 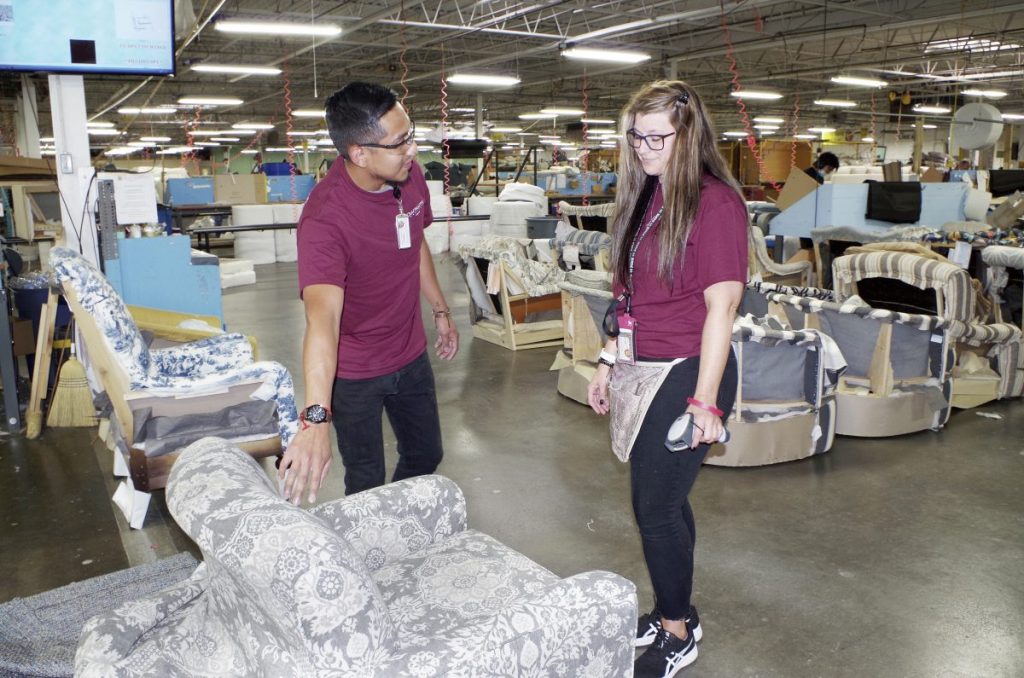 INSPECTORS — Above, Esteban Ocampo (left) and Jessica Kerley inspect pieces of furniture for quality control at Craftmaster in Hiddenite. 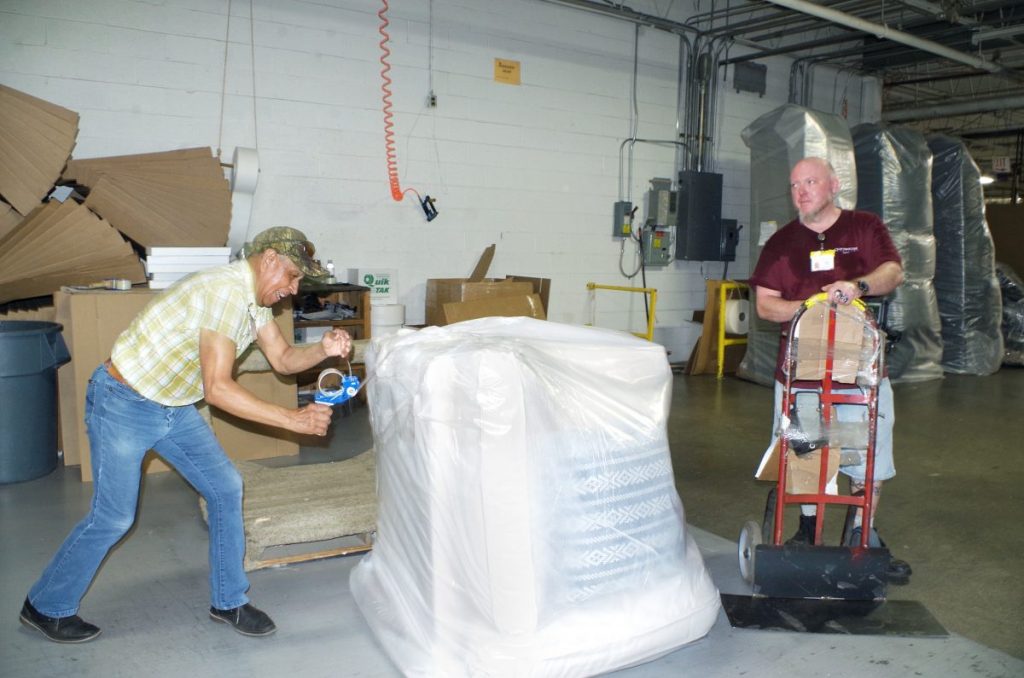 WRAPPING IT UP — After a piece is complete, it’s time to send it to the stores. Above, Conrado Rangel (left) wraps a chair while Allen Crowe waits to tranport it for shipment.