Family of lawman killed in 1959 remembers his life and legacy 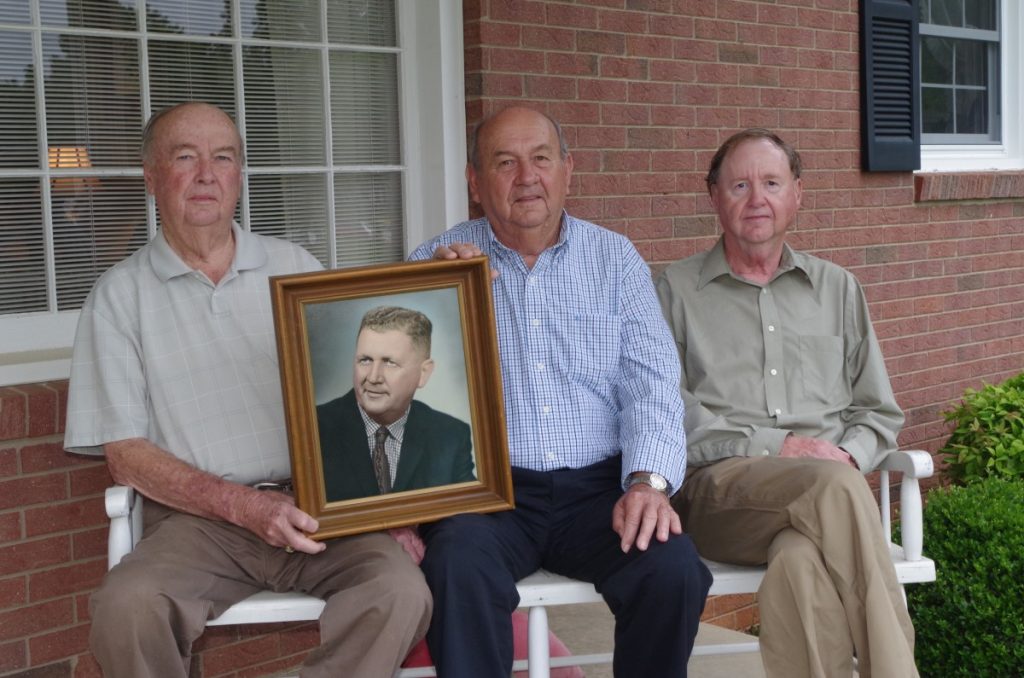 WITH THEIR FATHER’S PORTRAIT — Pictured above, at the home of Jack Bebber in Taylorsville: brothers Jack, Wayne, and Phil Bebber hold a portrait of their father, the late Sheriff Elisha Bebber.

When a rifle shot took the life of Alexander County Sheriff Thomas “Elisha” Bebber, Sr., on June 2, 1959, the public at large grieved along with the Bebber family. And fifty-eight years to the day later, on Friday, June 2, the Alexander County Law Enforcement Center will be named in his honor.

He was born on a farm in the Little River Township of Alexander County on March 24, 1906, son of the late Vance and Myrtle Burgess Bebber.

According to the June 4, 1959 issue of The Taylorsville Times, Elisha Bebber and deputy Joe James had gone to the home of Jones Ellis, in Taylorsville, where Ellis’ unemployed son, Willard, 38, had been causing a domestic dispute. Deputy James reported that the Sheriff’s Office had received a call from R.Z. Matheson, next door neighbor of the Ellises, saying Jones Ellis, 71, was at his residence, and requested him to call the Sheriff to come to the Ellis home and talk to Willard, and see if they could get Willard, who was not married, to stop abusing his father.

Deputy James, then 29, stated that he and Sheriff Bebber, 53, drove Bebber’s car to Matheson’s driveway, which lay between the two houses. James related that the and the Sheriff talked to Matheson and Jones Ellis a few minutes. Mr. Ellis told the officers that he wanted them to talk to Willard and tell him to get out and get a job. Willard had paid but little on his board since getting out of the Army a number of years earlier, Jones Ellis told the Sheriff.

Sheriff Bebber laughed, and said he would talk to Ellis’ son, but couldn’t tell him to get a job.

Unarmed, Bebber and James walked with Jones Ellis to the back door of the home, where they met Mrs. Ellis, who told the officers that she thought Willard was upstairs. Bebber and James looked through the downstairs rooms and, not finding Willard, began to walk up the staircase.

A shot was heard, James said, and Bebber fell back into his arms, saying, “Lord, I’m shot.” 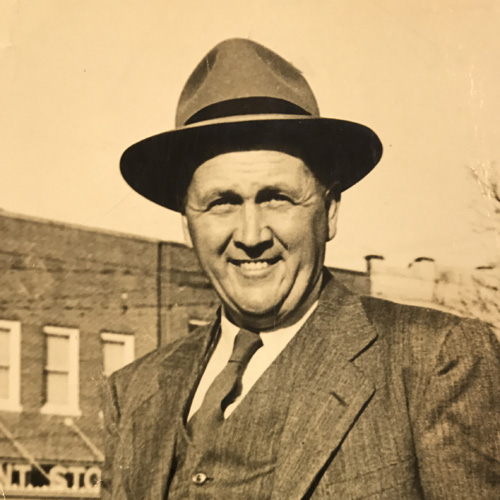 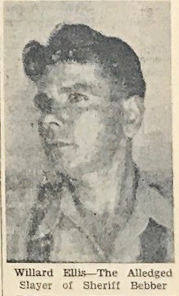 Photo of Willard Ellis, from June 4, 1959 issue of The Taylorsville Times. Ellis was later convicted of murder in Sheriff Elisha Bebber’s death and served the remainder of his life in prison.

James assisted Bebber down the stairs. R. Z. Matheson had heard the shot and ran inside, assisting James in getting the Sheriff outdoors. James ran to Matheson’s phone to call for an ambulance and other officers.

James then got his gun out of the Sheriff’s car and started to re-enter the Ellis home, but Matheson warned against it, saying he would get shot, too.

An ambulance arrived on the scene in a few minutes and took Bebber to the hospital, but he was dead on arrival. 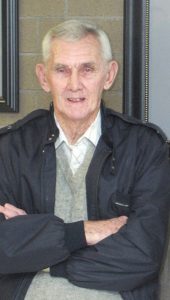 Joe James, seen here in 2013, was deputy with Sheriff Elisha Bebber when the sheriff was shot.

The highway patrol was alerted and sent tear gas guns and hand grenades here to help drive Ellis from the house. In the meantime, guards from the local prison camp, and Town officers and local Highway Patrolman arrived.

R.Z. Matheson, knowing Ellis, told the group to let him try to talk him into a surrender. About 35 minutes after the shooting, Willard Ellis emerged out the back door of the home and was taken into custody. He was convicted October 1, 1959, of the first degree murder of Elisha Bebber and was sentenced to life in prison by Judge Hubert Olive. Willard Ellis died in prison on May 21, 2002. 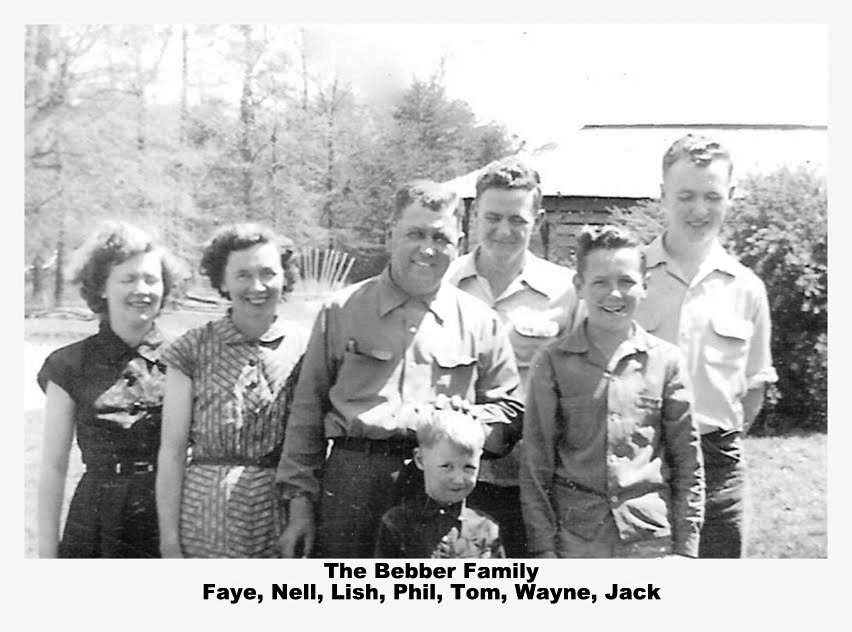 Remaining brothers Jack, Wayne, and Phil sat down recently and spoke with The Times about their father.

Jack noted that he and his family really appreciate all those responsible for naming the center in their father’s honor.

A farmer by trade, Elisha was elected to the Sheriff seat in 1950, but kept up the family farm in the Little River area.

“He loved his beef cattle,” Wayne recalled. “He sawmilled, farmed, and raised tobacco. Tobacco was our cash crop.”

Elisha kept at all these activities, and performed his duties as Sheriff, too, despite having severe arthritis, which interfered with his ability to raise one arm up high.

“He was a bird hunter, too. He always loved hunting,” Jack related.

Elisha is remembered as a generous man also.

“He helped people — if people didn’t have a place to stay, they’d stay with us,” Phil said.

“Dad would help people by loaning money out, too,” Wayne noted.

“He was a wonderful dad,” Phil said.

Elisha had wanted to retire after his second term, recounts a contemporary issue of the Hickory Record.

“Sheriff Bebber, who was serving his third consecutive term as chief law enforcement officer of Alexander County, loved his county and its people. He virtually was drafted to run for re-election in 1958, as he wanted to retire from office and devote his full time to the operation of his four-hundred-acre farm in the Western part of the county, where the good, fertile farmland nestles up to the foothills of the Brushies,” The Record stated.

There were no doubt many spoken and written condolences to the Bebber family. Among those, shared with The Times this month from the family’s scrapbook, was a June 7, 1959 letter from the widow of former Taylorsville Police Chief D.A. “Dexter” Millsaps, who was shot and killed in the line of duty in 1944, as shown below:

Dear Mrs. Bebber –
I don’t believe I have ever met you, and perhaps you don’t know me. But I just wanted you to know I was thinking of you in your sorrow, your husband’s death was similar to the death of my husband. I just don’t know what to say. But He who watches over the sparrow I am sure will watch over you.
With much sympathy,
Mrs. D. A. Millsaps

A crowd of over 5,000 people, including about 30 Sheriffs, attended Elisha’s funeral at Three Forks Baptist Church.

At the time of Elisha’s death, the family was in the middle of building a new home.

“We never had moved in yet, it was just barely finished,” Wayne stated.

The community pitched in to help the grieving family with the farm.

“We worked a tobacco crop, where our grandpa, Carl ‘Mack’ Moose, owned land. We had a tobacco crop to raise, and the neighbors helped,” Wayne related.

Herman Lackey and Conway Sharpe (father of Times’ current publisher, Lee Sharpe) began a Memorial Fund for Sheriff Bebber the week of his death. At the regular weekly meeting of the Taylorsville Moose Lodge, the lodge voted to give $100 to the fund. The fund was to furnish a room in the new addition of the Alexander County Hospital.

Belk’s Department Store in Statesville said in their June 4 Times’ ad, “We extend our sympathy to the family of the late Sheriff Thomas Elisha Bebber, and the people of Alexander County on the loss of their efficient Sheriff in his untimely death.” The ad also urged readers to support the Bebber Memorial Fund.

In the aftermath, the County Commissioners appointed Elisha’s son, Thomas Elisha “Tom” Bebber, Jr., to be Sheriff of Alexander County. Tom had experience as a law officer, having worked about six months with the Hickory Police Department, but had left policing to work the family farm about two months before his father’s death. He filled his father’s unexpired term, then in 1962 was elected to the NC State House (its youngest member). Afterward, in 1970, he was elected as Alexander County Sheriff and served five terms, retiring in 1990. Tom is the longest serving Sheriff in the county’s history, with 22.5 years of service. 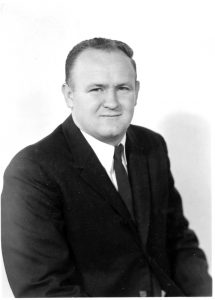 Trish Bebber Dagenhart, daughter of Jack and Mildred Bebber, said of the center’s renaming for her grandfather:
“I think this is a time to come together, not only to honor him, but all our law enforcement officers,” Dagenhart related. “Come out, bring your lawn chairs, and honor all our law officers.”

A Dedication Ceremony naming the Thomas E. “Elisha” Bebber, Sr., Alexander County Law Enforcement Center is planned on Friday, June 2, 2017, at 6 p.m. at the center, located at 91 Commercial Park Ave. in Taylorsville, across from CVCC-Alexander.

This complex will be named in the memory and honor of Sheriff Bebber for his ultimate sacrifice June 2, 1959.

Those attending may park at CVCC-Alexander Center or at the old Hospital parking lot on NC 16 in Taylorsville, with overflow at the old Community One Bank lot (shuttle will be provided). Attendees are urged to bring lawn chairs for seating.