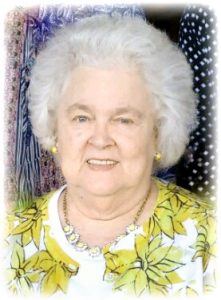 Annie was born on April 21, 1939, in Wilkes County, daughter of the late Rufus and Emma Oliver. As a young girl, she professed faith in the Lord Jesus Christ at Gordon Baptist Church, was baptized in the Moravian Falls pond, and remained faithful for life.

She graduated valedictorian from West Wilkes High School and attended Clevenger College, where she met Lynn Wade Childers, her husband of 59 years.

Annie, along with Wade, raised their six children according to Proverbs 22:6 – “Train up a child in the way he should go: and when he is old, he will not depart from it.” The calling of motherhood was a source of great joy and fulfillment.

During her children’s school years, she was often relied upon to substitute teach and to donate her time and talents for numerous school activities. Her love of children inspired her to teach Sunday School for more than 30 years and work as the after-school care director at Taylorsville Elementary School for 18 years.

She was a nurturer at heart and showed kindness to everyone she met, especially her 12 grandchildren. Annie joined her husband in the Gideon Ministry in 1981 and remained active for life holding various camp and state positions. She most recently served as the Taylorsville Camp President.

Along with her parents, she was preceded in death by her brothers, Bruce and Don Oliver.

In lieu of flowers, memorials may be sent to The Gideon’s International at PO Box 517, Taylorsville, NC 28681.