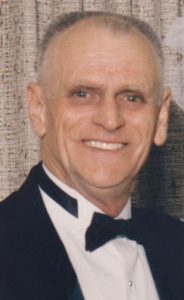 Mr. Gwaltney was a resident at Catawba Valley Living at Rock Barn, in Claremont, having previously resided in the Hiddenite Community. He was a member of Linney’s Grove Baptist Church in Hiddenite.

During his 20-year military career, he served in the Korean War, Vietnam War, and was also stationed in various locations in Europe and in the United States. While stationed in Germany, William married Hanni Charlotte Pruch on January 31, 1958 in Schwaebisch-Gmuend. During another tour of Germany, the Gwaltneys would adopt their only child, Evelynn.

After having served our Country for 20 years, William retired from the United States Army on December 31, 1973, while stationed in Fort Hood, Texas. When asked about his military service, he would say his only regret was not pulling another 10 years, so that he would have retired with 30 years of service. After his retirement at the end of 1973, he moved his wife and daughter back to his hometown of Hiddenite.

In addition to his parents and wife, he was preceded in death by his siblings, Odessa, Harold, Gilmer, Efird, Robert, and Ronald.

The family wishes to express their sincere appreciation to the staff at Catawba Valley Living at Rock Barn, Catawba Regional Hospice, Alesha Flynn (his caregiver from Bayada), his care team from VA Home Based Primary Care, the Stephen Ministry at Concordia Lutheran Church in Conover, and Adult Life Programs of Hickory.

William was stationed in Washington D.C. in November 1963, during the time of President Kennedy’s assassination in Dallas, Texas. On November 25, 1963, approximately one million people lined the route of the funeral procession, from the Capitol back to the White House, then to St. Matthew’s Cathedral, and finally to Arlington National Cemetery. William and Hanni were among those one million people lining the crowded streets of D.C. to pay respect, as the flag-draped coffin of our 35th President was carried on a horse-drawn caisson. As the caisson passed by, William labored to raise his arm to salute amongst the tightly gathered crowd of mourners.

William Howard Gwaltney and his wife, Hanni, will be laid to rest at Arlington National Cemetery, in Virginia, at a private burial.

Condolences may be sent to the Yount Family at www.drumfh-conover.com.