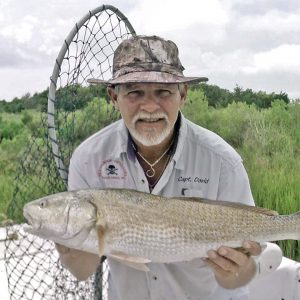 A memorial service to celebrate his life will be held at 4:00 p.m., on Saturday, October 28, at Jones Funeral Home, on Dyson Street, in Holly Ridge. Pastor David Canady of the family will be officiating.

David was born in Rockingham on June 17, 1959. A graduate of Alexander Central High School, he enlisted in the US Army and was an Airborne Ranger. He married the love of his life, Tameletah Starnes Baxley, on January 26, 1980, and they were married for 37 years until her passing in 2016.

David was a well respected auto mechanic, Merchant Marine Officer for the US Coast Guard, and was, as he would say, a professional redneck. David and his late wife, Tammy, founded Headhunter Outdoors in 2000, and began providing recreational inshore fishing charters to locals and tourists in the Topsail area.

He could always make you laugh with a joke or funny story. If he picked on you, he really liked you. Those who knew him knew that you’ll get his opinion, even if you don’t ask. He always knew where to find a redfish or a flounder, and enjoyed a good day on the water. If he wasn’t on the boat, he was in the woods hunting. An active member of the community and supporter of small businesses, he was regularly involved in both the Pender County Longbeards & Ducks Unlimited chapters, and was an outspoken advocate for the recreational fishing industry.

He is now reunited with Tammy, and he leaves behind a daughter, Christina Baxley Asbury of Holly Ridge, his only grandson and favorite little monkey, Lincoln Asbury; a son-in-law, Ashley W. Asbury; a sister, Joan Baxley; his uncle, Richard Baxley; four nieces; two nephews; and many aunts, uncles, cousins, friends, clients, and his faithful, loyal companion, Tug. He is also survived by his mother, Arba Della Baxley of Taylorsville.

Electronic condolences may be left for the family at www.jonesfh.org.