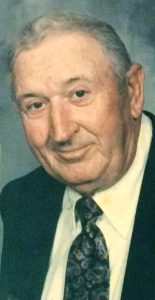 Henry Lee Adams, 85, of Taylorsville, passed away after a lengthy illness on December 24, 2017 at his residence.

He was born July 13, 1932, daughter of the late Lindsey Lee and Queen Elizabeth Barnes Adams. Henry was retired from Broyhill Furniture after 50 years employment, and was a member of St. Paul Lutheran Church, Taylorsville.

In addition to his parents, he was predeceased by a brother, Jimmy Adams; a sister, Barbara Adams Rogers; two nephews, Todd Rogers and John Harris; three brothers-in-law, William Robinson, Jim Harris, and Glenn Harris; and a sister-in-law, Norma Harris.

A memorial service and celebration of life will be conducted at 11:00 a.m., Saturday, January 6, 2018, at St. Paul Evangelical Lutheran Church, U.A.C., 323 First Ave., Taylorsville, with Rev. David Carver officiating. The family will receive friends in the church parish hall after the service.

Condolences may be e-mailed to the Adams Family by visiting our website at www.chapmanfuneralhome.com.