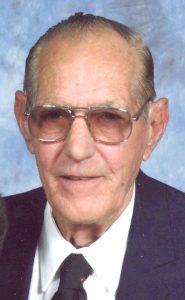 He was born on August 23, 1926, in Alexander County, the son of the late Walter Ester Bolick and Hattie Hall Bolick. He was a life-long member of Mt. Pisgah Lutheran Church. Clarence proudly dedicated 52 years of service to The Catawba Paper Box.

Hickory Funeral Home is honored to serve the Bolick Family.