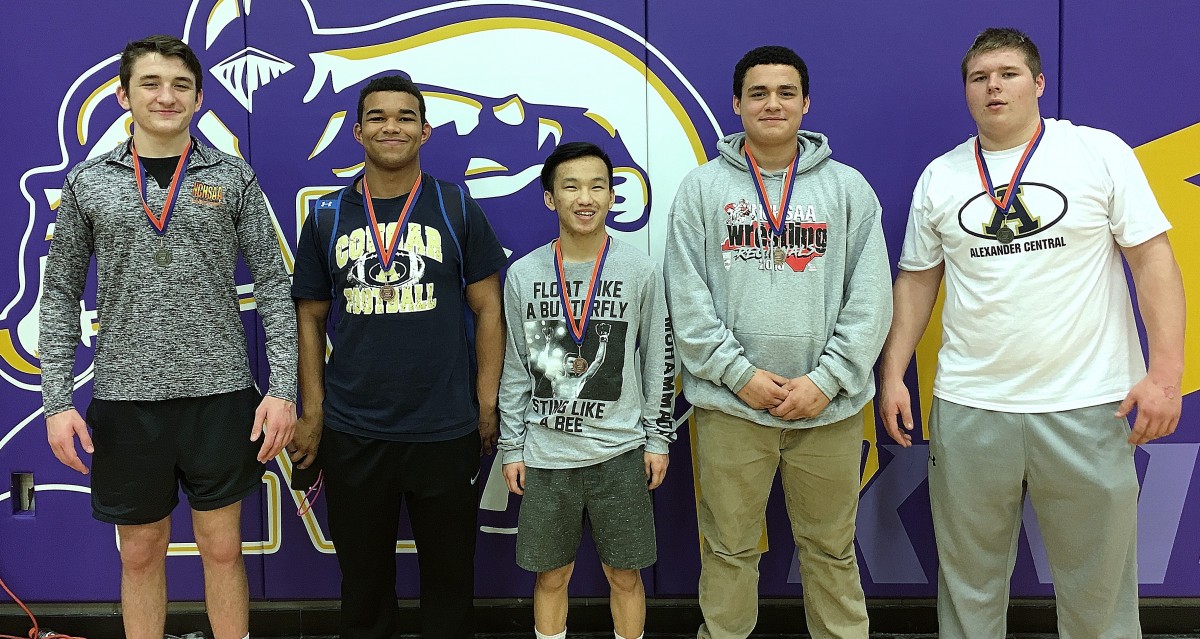 ADVANCE TO STATES – Five members of the ACHS Wrestling Team advance to the NCHSAA 3A State Finals with their performances at the West Regional in Hendersonville. Pictured from the left are: Ethan Lewis, Tevin Clark, Charlie Lee, Marterion Howell, and Isaac Chapman.

By D.N. PENNELL, Jr.
Five members of the Alexander Central Varsity Wrestling Team have earned the right to participate in the biggest grappling event in North Carolina for high school mat men, the NCHSAA State Championships in Greensboro.
By finishing in the top four in their respective weight classes at this past weekend’s 3A Western Regional, five Cougars earned a spot at the 3A finals coming up this weekend at the Greensboro Coliseum.
Alexander’s Ethan Lewis and Isaac Chapman earned runner up finishes, while Charlie Lee placed third in his weight class at the West Regional hosted by North Henderson High School on February 9-10. In addition, Tevin Clark and Marterion Howell qualified via fourth place finishes in their divisions.
The 2018 NCHSAA State Championships are scheduled for Thursday, February 15 through Saturday, February 17, at the Greensboro Coliseum. The Cougar grapplers will join the remainder of the 3A competitors in opening round matches on Thursday afternoon at 4 pm
In this past weekend’s regional event, Lewis (160 pounds) and Chapman (285 pounds) advanced to the title match in their weight divisions before suffering their lone setback of the weekend.
Lewis posted three straight wins to advance to the finals in his weight class. He faced unbeaten Paul Searcy (48-0) of North Henderson in the title match and dropped a close 3-2 decision. Lewis will be a two seed at this weekend’s state tourney and is a returning state runner-up.
Chapman posted three pinfall wins to advance to the title match in Saturday’s Heavyweight class. In the finals, the Cougar junior faced off against Ashebrook’s Atwon McClee. McClee managed to post a pin against Chapman to claim the title in the 285 division.
For Lee, Clark, and Howell the road was tough as the trio fought through the consolation bracket to earn a state berth. After losing in the second round, Lee rallied to win four straight matches and claim third place in the 106-pound class. He will enter the state finals as a three seed. Tevin Clark (195) and Marterion Howell (220) dropped their second round matches before rallying for three straight wins to earn a spot in the consolation finals. Both wrestlers fell in the consolation finals and finished fourth.

Alexander’s Chase Treadway and Christian Romero battled through the consolation bracket but came up one win short of earning a state final berth.
In the team standings, Alexander turned in an impressive third place finish, placing behind North Henderson and St. Stephens in the team results. North Henderson finished with 177.5 team points, followed by the Indians with 155 points and ACHS with 114 total points. Enka and Hunter Huss rounded out the top five.