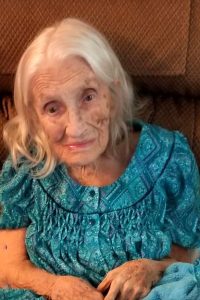 Mary Wyatt Webb, 88, of York Road, Stony Point, passed away on Wednesday, September 19, 2018 at her residence.

Mrs. Webb was born August 8, 1930, in Haywood County, the daughter of the late James Robert Wyatt and Rhoda Conard Wyatt.

She had worked in housekeeping and was of the Baptist faith. She loved and cared for her family.

Including her parents, she was preceded in death by her husbands, Reeves Webb and Robert Slagle; and 19 brothers and sisters.

Services will be held in Waynesville.