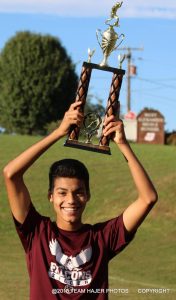 In a defensive battle, East Alexander edged West to claim the tourney title and wrap up a clean sweep for the Alexander County Schools. West Alexander captured the regular season title and was the event’s top seed.

In Wednesday’s finale, East’s Jony Gutierrez scored the lone goal of the match in a 1-0 Falcon win. Corey Lawson recorded the assist for East. In the net, Falcon keeper Branson Lowe notched the shutout win.