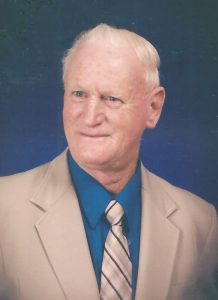 He was born February 4, 1929, in Hiddenite, to the late Ramie and Mamie Mitchell, Sr.

He served in the U. S. Air Force, ending with the rank of staff sergeant. He worked as a machine operator at Schneider Mills in Taylorsville, and later sold Rawleigh products. He served as secretary of the Disabled American Veterans Chapter 84, and was a charter member and deacon of Temple Baptist Church in Stony Point.

In addition to his parents, he was preceded in death by a sister, Louise Walsh of Statesville; a brother, Solon Mitchell; and sister-in-law, Jane Davis Mitchell of Hiddenite.

He is survived by his wife of 64 years, Camilla Fulbright Mitchell of the home; three daughters, Kathy Mitchell and Lou Ann Mitchell, both of Stony Point, and Hannah Mitchell of Corona del Mar, California; two sisters, Becky Burke and husband Alvin of Taylorsville, and Hilda Hayes of Lexington; half brother-in-law, Marshall Fulbright and his wife Julie of Taylorsville; and many nieces and nephews.

Visitation will be at 2 p.m., Sunday, July 28, 2019 at Temple Baptist Church in Stony Point, followed by funeral services at 3 p.m. at the church. Pastor Jason Payne will officiate. Burial will follow in the church cemetery with full military honors accorded by Alexander County Veterans Honor Guard.

In lieu of flowers, donations can be made to: Disabled American Veterans Chapter 84, 582 Carrigan Road, Taylorsville, NC 28681.

Adams Funeral Home and Cremation Services in Taylorsville is honored to be serving the Mitchell Family.