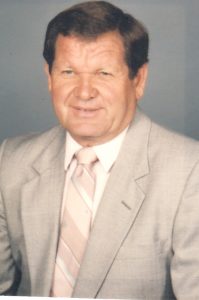 Billy “Bill” Charles Lawrence, 82, of Statesville, passed away at his home, surrounded by family and friends, on August 21, 2019.

Born to the late Charles and Emma Quick Lawrence, Bill was a member of Linneys Grove Baptist Church, where he served as choir director. Bill started his career by building churches in the Missouri and Kansas area. Working for Butler Construction, alongside his wife, Helen, he worked for the US Government, on the Pentagon, prior to 911, then went on to build Air Alert Shelters that held B2 Stealth Bombers.

Those left to cherish the memory of Mr. Lawrence include his wife of 28 years, Helen Hayes Lawrence; daughters, Lori Lawrence of Statesville, and Lisa Barringer of Monroe; stepson, Kevin Souther and wife Kimberly of Statesville; grandchildren, Bryant Ferrell and wife Cathy, Alexis Ferrell, Paige Teasley and husband Blake, Claire Barringer, and Jake Barringer; step-grandchildren, Kyle and Cammie Souther; a sister, Paulette McMurtree; along with many nieces and nephews.