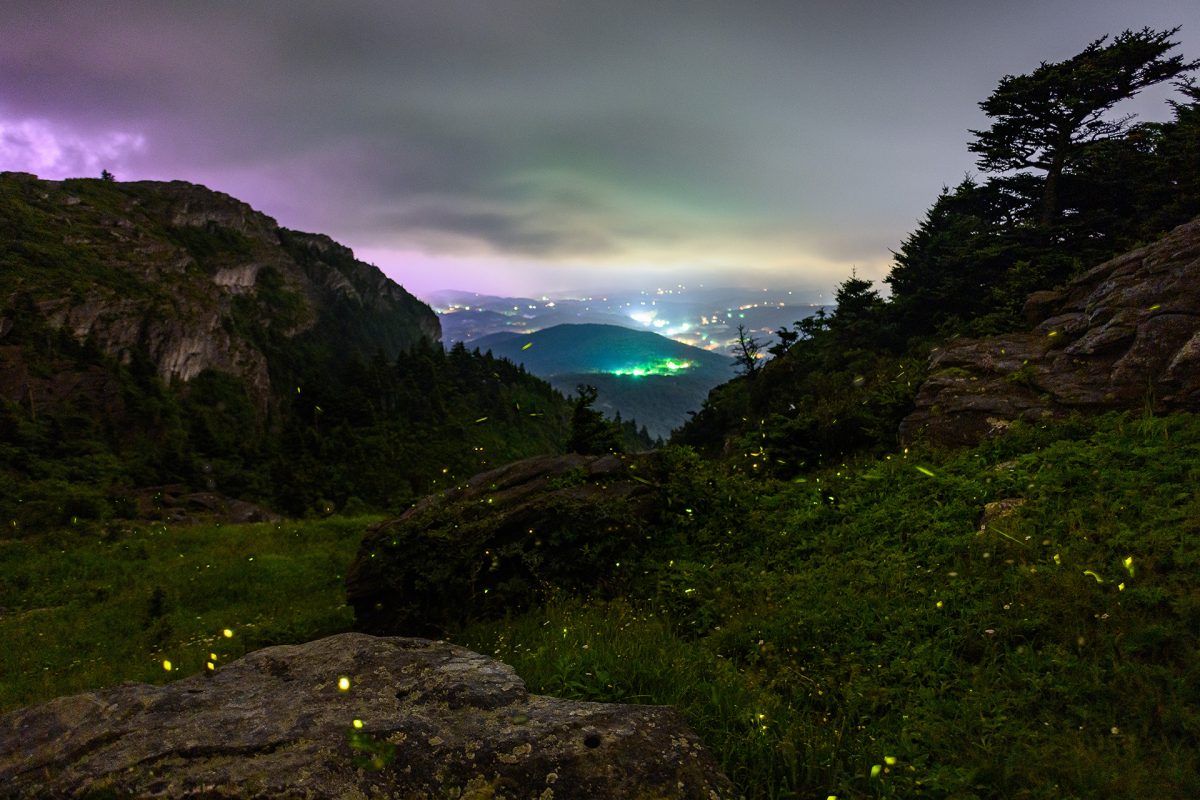 Synchronous fireflies light up an overlook just below Grandfather Mountain’s Mile High Swinging Bridge. Found this summer on Grandfather Mountain, Photinus carolinus is the only species of firefly in North America whose individuals can synchronize their lighting display, meaning they can flash in unison. (Photo by Jim Magruder | www.magruderphotography.com)

The discovery of a special type of firefly on Grandfather Mountain has experts aglow with excitement.

The nonprofit nature park in Linville, N.C., is officially home to Photinus carolinus, the only species of firefly in North America whose individuals can synchronize their lighting display, meaning they can flash in unison.

Photinus carolinus famously resides in the Great Smoky Mountains National Park, where it is a major draw for visitors from late May through early June. During that time, hopeful spectators enter a lottery to win tickets to witness the phenomenon. And with only a limited number of tickets offered, the spectacle has grown ever more exclusive. 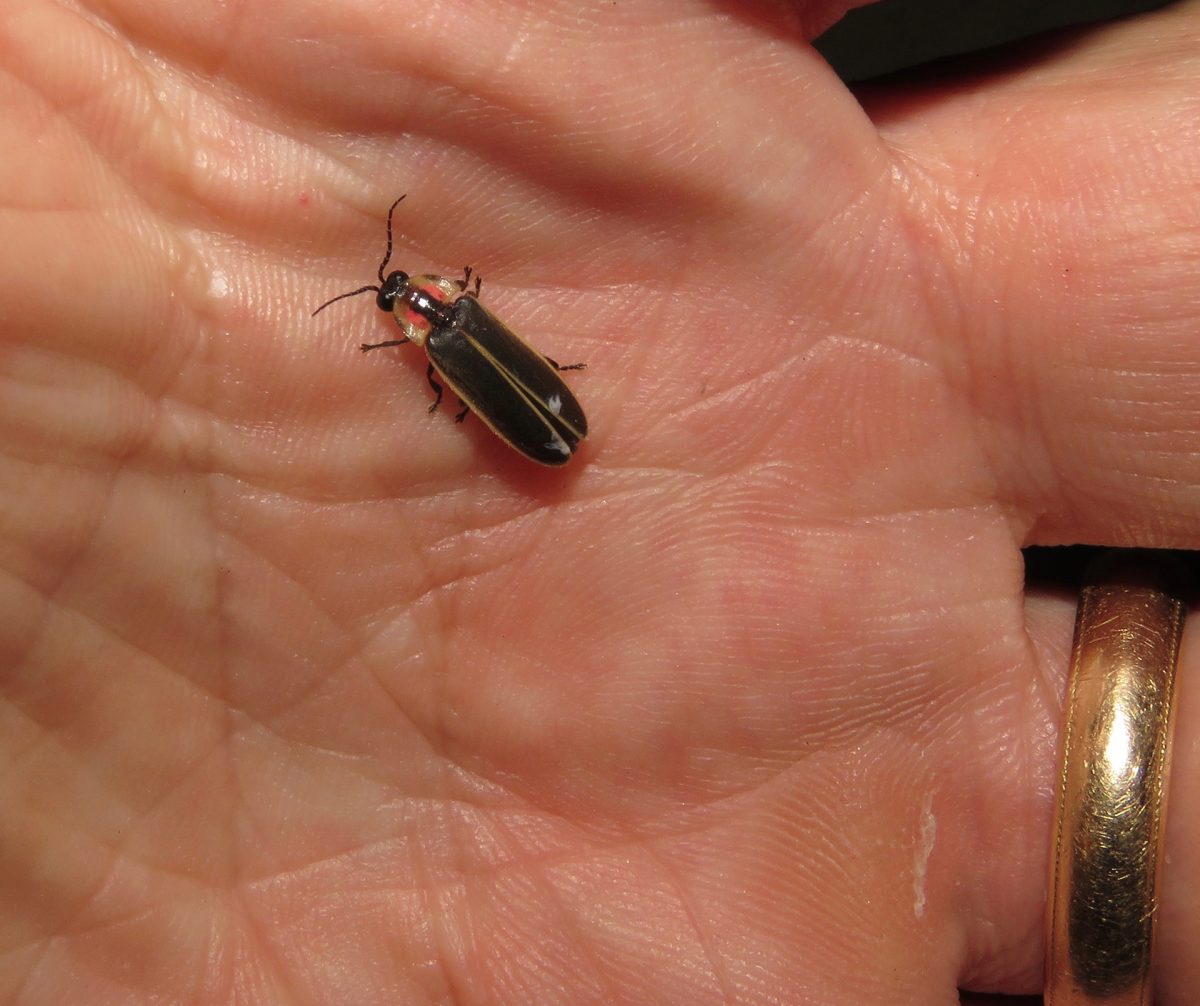 The revelation of Photinus carolinus’ existence on Grandfather Mountain comes courtesy of Dr. Clyde Sorenson, an entomologist from N.C. State University. While hosting a workshop on the mountain, Sorenson was invited to stay the night in the park’s guest cottage near the Woods Walk & Picnic Area.

“I had the intention to see what kind of fireflies might be around at the high altitude,” Sorenson said.

Around 9:30 p.m., he saw a few fireflies flashing and knew right away that it was something special.

“As it got dark, the numbers steadily went up, and between 10 and 10:30 p.m., there were several hundred all around the guest cottage and Woods Walk, flashing synchronously,” Sorenson said. “I knew what to look for, and apart from the flash patterns, which are species specific, there are neurological features that are distinct. They were doing what they were supposed to be doing, and when I looked at them in my hand, they had all the diagnostic features for that same species.”

Sorenson later confirmed his findings with East Tennessee naturalist Lynn Faust, a preeminent expert on the subject, who, among numerous other publications, wrote a field guide on fireflies, which Sorenson described as “one of the best resources to anyone who is interested in learning more about these critters.”

“You know, this is a really exciting discovery, and on Grandfather Mountain, one of the exciting things about visiting the park is that you never know what you’ll see or find,” said Jesse Pope, president and executive director of the Grandfather Mountain Stewardship Foundation, the nonprofit organization that owns and operates the Linville, N.C., nature park.

Sorenson is particularly excited, because synchronous behavior is rare in fireflies.

“There’s only a handful of species all around the world that do this, and for a long time, this particular species, the phenomenon of seeing large numbers of them synchronizing has been associated tightly with just a couple geographical areas,” he said. “But the species goes all the way from New York to Georgia. Where they have been most widely known and recognized for so long is at Elkmont in the Great Smoky Mountains National Park. But that’s at 2,200 feet. Where I saw them (at Grandfather) was at 4,200 feet.”

What makes Grandfather Mountain such a unique location, Sorenson said, is its elevation range. Starting at a relatively low elevation of 3,000 feet, the mountain reaches up to nearly 6,000 feet. And while conducting a research survey near the Mile High Swinging Bridge, Grandfather Mountain’s director of education, Amy Renfranz, observed the same fireflies blinking synchronously.

“At the top of the mountain, they blinked in a slower cadence, because the temperature was colder,” Renfranz said. “Males were observed flying low to the ground, and females were perched along the ground. The groups of fireflies would totally sync light rhythms with each other.”

During one survey, Renfranz observed more than 1,000 fireflies from one overlook on the mountain.

“They could start down at the bottom (of the mountain) very early in June and continue well into July, as you go up the mountain,” Sorenson said, “which presents a really unique opportunity for, perhaps, a lot more people to see them over a much longer span of time. Generally, at any given location, they’re really active for about two to three weeks, and then they’re done for the year. But again, because Grandfather has that great elevational span, it’s possible that the display could last for many weeks.”

This would be a boon for the scientific community and spectators alike, he said, as it would offer another opportunity to study Photinus carolinus and observe one of nature’s most marvelous light displays.

“Any time people can witness one of these really neat natural history spectacles, it increases their appreciation for the natural world and their interest in helping preserving it,” Sorenson said.

“It tickled me to no end,” Sorenson said. “I was kind of giddy for a little bit.” 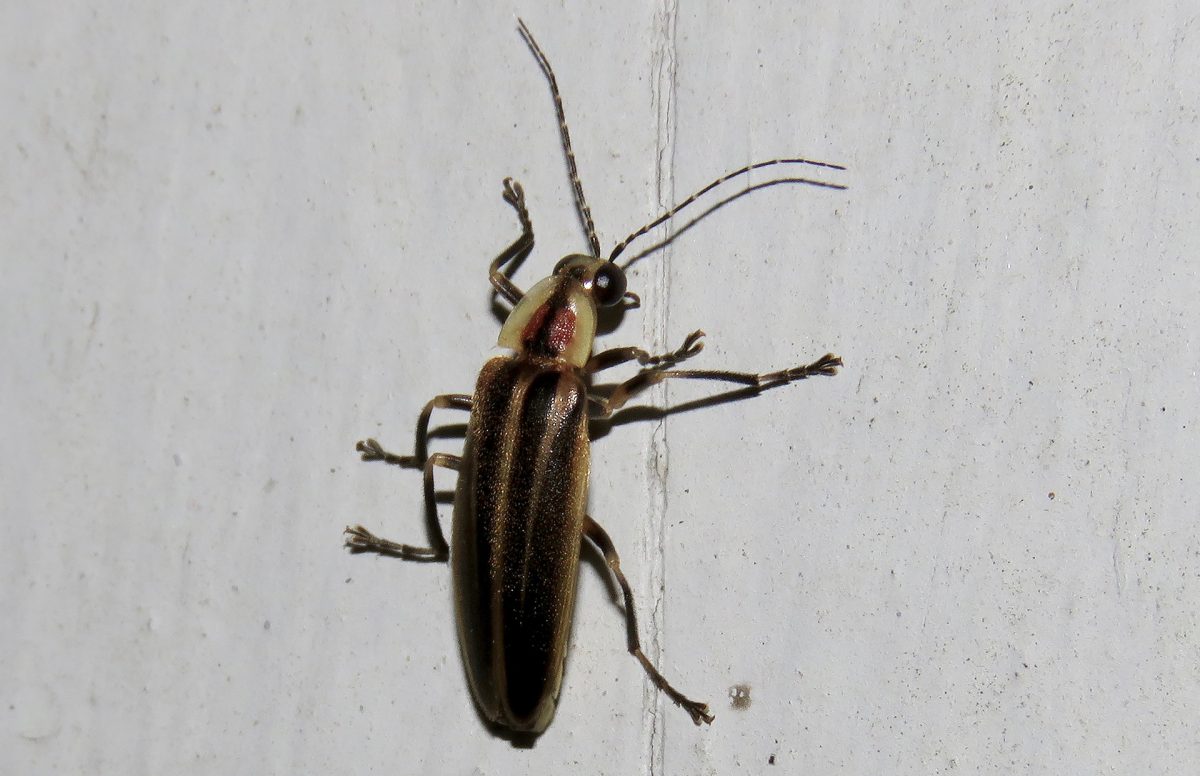 This photo depicts a firefly from the Photuris genus, likely Photuris versicolor. The females of that genus are the femme fatales of the firefly world. They mimic the light patterns of other fireflies, thus attracting males that they eat, rather than mate with. Photinus carolinus is often a prime target of Photuris versicolor, due their similar light displays, and both species were documented in the same place and night on Grandfather Mountain, indicating that Photuris was preying on carolinus. (Photo by Clyde Sorenson | Courtesy of the Grandfather Mountain Stewardship Foundation.)

Pope noted that Photinus carolinus is wonderful addition to the pantheon of plants and animals that call Grandfather Mountain home.

With the fireflies now out of season, park staff is in the process of organizing future viewing events in which the public can witness the bugs in action.

“A lot of people come to the park, maybe just to cross the bridge or get close to an animal,” Pope said. “But while they’re here, they’re immersed in a natural experience unlike any other mountain on Earth.”

The not-for-profit Grandfather Mountain Stewardship Foundation strives to inspire conservation of the natural world by helping guests explore, understand and value the wonders of Grandfather Mountain. For more information, call 800-468-7325, or visit www.grandfather.com to plan a trip.