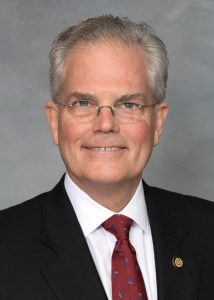 State Sen. Andy Wells, (R) of Hickory, who represents Alexander and Catawba counties (District 42), has announced his intention to run for the seat of N.C. Lieutenant Governor in the 2020 election.

“Earlier this year, in a single month, 130,000 illegal immigrants poured across our border. But, here in North Carolina, Democratic sheriffs in our biggest counties refused to cooperate with federal law enforcement to deport illegals who were arrested for crimes. It’s crazy.

“Republicans in the General Assembly passed a bill to stop Sanctuary Sheriffs. But Governor Cooper vetoed the bill.

“But, this time, there is good news: With no budget the State continues to spend the same amount it did last year. Spending can’t go up. So Governor Cooper can’t increase spending.

“I am running for Lt. Governor to stand up for conservative principles – for less government, less spending and for stopping Sanctuary Sheriffs – just as I have in the Senate,” Wells stated.

To learn more about Senator Wells you can visit www.andywells.org and https://www.ncleg.gov/Members/Biography/S/388.