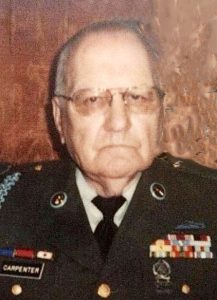 Cpl. Donald G. Carpenter US Army (Retired) passed away peacefully on Sunday, February 9, 2020 surrounded by his loving family at Wake Forest Baptist Health-Wilkes Medical Center. He had been in declining health for three years and was critically ill for one month.

He misrepresented about his age at 17 and joined the United States Army in 1948. He took basic training at Camp Breckinridge, Kentucky. He was assigned to the 25th Inf. Division based in Honolulu, Hawaii and in July 1950 he was deployed to Korea at the onset of the Korean War. He endured many weeks of ferocious fighting ending in him being critically wounded in his left arm, right hip, and lower legs on September 2, 1950. As a result, his left arm was amputated at the elbow. He received five Purple Hearts for his wounds along with the Bronze Star and Korean War Unit Citation.

Life after military service had its ups and downs for Mr. Carpenter, but in 1959 he met the love of his life in Nancypat Thurbon, an RN at the local VA hospital. They would later marry and have four children. On February 6, 2020 Don and Nancy celebrated 60 years of marriage together.

Throughout his life, Mr. Carpenter never let his amputation be a hindrance and he enjoyed many things but none more so than being an auto mechanic and racing, specifically building racing engines and racing carburetors. In 1960, he began his racing career in earnest owning and tuning his own car. In 1961, he joined the team owned by Elmer Boggas becoming head mechanic and chief tuner. They would go on to win hundreds of races on the dirt tracks of West Virginia, Ohio, and Pennsylvania.

Racing continued throughout his life with a daughter and son racing motocross throughout the 1970’s and his other son racing Late Model Stock cars at Hickory Motor Speedway in the late 1990’s and early 2000’s. He was a Christian and attended services at the Liledoun Road Church of Christ.

Mr. Carpenter was preceded in death by his father, Lloyd Carpenter; a brother, Aretus Mullins; and his mother and step-father, Ray and Audrey Mullins.

He is survived by his wife of 60 years, Nancypat T. Carpenter of the home; son, David and wife Brenda of Taylorsville; daughter, Kim Evans and husband Scott of Fayetteville, West Virginia; daughter, Teresa Garrison and husband Jaymz of Millers Creek; son, Greg and wife Julia of Taylorsville; grandson, Dekota Stewart; four granddaughters, Kara, Jocylyn, Haddi, and Audrey, who were the light of his life and kept him young; his sisters, Nina, Lenora, Kathleen, Chiquita, and Wanda; his brother, Larry; and numerous nieces and nephews.

Services for Mr. Carpenter will be held at 3 p.m., Saturday, February 15, 2020 at the Liledoun Road Church of Christ. Preacher Curtis Gilbert will be officiating. Burial will follow in the Taylorsville City Cemetery with full military honors accorded by Alexander County Veterans Honor Guard. The family will receive friends from 1 to 2:45 p.m. prior to the service.

Mr. Carpenter was a years long member of the DAV and VFW and, in lieu of flowers, the family asks that donations be made to any Veterans Association of your choice.

Adams Funeral Home and Cremation Services is honored to be serving the Carpenter Family.