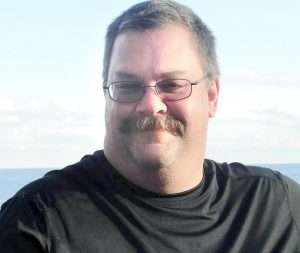 John Hughes Vandervort, 51, of Wilkesboro, passed away Wednesday, May 5, 2021, at Wake Forest Baptist Medical in Winston-Salem.

John was born June 3, 1969, in Greenville, Pennsylvania, to Harry Hughes and Judith Foulk Vandervort. He worked for 27 years with the North Wilkesboro Police Department. He loved his community and fellow officers. He worked with the Wilkes County Sheriff’s Department. He was a great mentor to many people and worked with youth at Tiffany’s Place. He participated and played in a Badge Bowl to raise $1,000 to help purchase a photo identification system for the Crime Prevention Unit of the Wilkes County Sheriff’s Department.

John also worked as a patrol officer at the substation in Skyview Apartments to help enforce parking ordinances and crack down on drug dealers. While there, he worked with the children in the community to guide them in making wise choices. He was a member of Celebration Church.

In addition to his mother, John was preceded in death by a sister, Amy Walters; a nephew, Dustin Walters; and his father and mother-in-law, Lytle and Juanita Keys Elmore.

The family would like to say a special thank you to the doctors, nurses, and staff in the Intensive Care Unit, the Critical Care Unit, and the Rehabilitation Center at Wake Forest Baptist Health-Wilkes Medical Center for their care and compassion during John’s sickness.

Flowers will be accepted or memorials may be made to Amelia’s College Fund c/o State Employees Credit Union Account #40360422; or Child Abuse Prevention Team, 203 East Main Street, Wilkesboro, NC 28697; or to the donor’s choice.