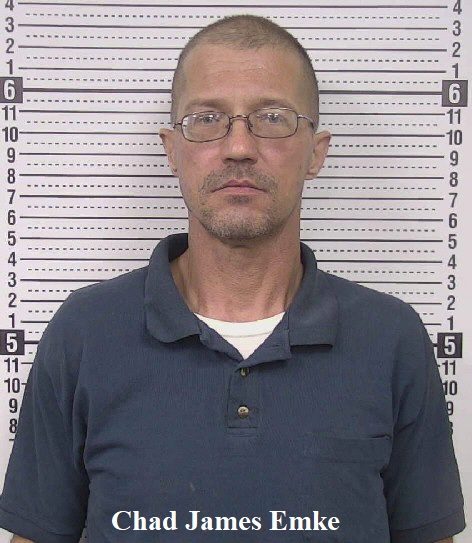 A Taylorsville resident has been charged with two felonies after a man was injured in a shooting that took place on Monday, July 12, 2021, outside the Caldwell County Courthouse in Lenoir.

According to a press release from the Lenoir Police Department, Chad James Emke, age 48 of Taylorsville, was charged with one count of assault with a deadly weapon with intent to kill inflicting serious injury and one count of Child Endangerment.

According to a press release from Lenoir Police Chief Brent Phelps, on July 12, at around 10:49 AM, the Lenoir Police Department responded to a shooting in the area of 216 North Main Street, Lenoir, NC. Upon arriving on scene, officers found the victim, Travis Lee Webb, age 35 of Lenoir, suffering from apparent gunshot wounds to his upper body.

A suspect, Chad James Emke, 48, of Taylorsville, was taken into custody at the scene by Law Enforcement. Emke was transported to the Lenoir Police Department for questioning in reference to the shooting. He was then taken to the Magistrate’s office where he was charged with the above listed charges.

Early investigation into this incident reveals that the suspect, Emke, and the male juvenile occupied a vehicle in the roadway in front of 216 Main Street. At some point, Webb approached Emke’s vehicle and a verbal altercation ensued. During the altercation, Emke drew a 9mm semi-automatic pistol and shot Webb in the upper body twice.

It was discovered that Emke had a scheduled court appearance at the Caldwell County Courthouse for custody related issues on this date. Both Emke and Webb were acquainted with one another and this is believed to be an isolated incident. The male juvenile was not physically harmed during this incident.

As of Monday afternoon, the victim, Travis Lee Webb, was being treated for his injuries. His condition is unknown at this time, police indicated.

Anyone with information relating to this or any other crime is asked to contact the Lenoir/Caldwell County Crime Stoppers at 828-758-8300 or the Lenoir Police Department at 828-757-2100.