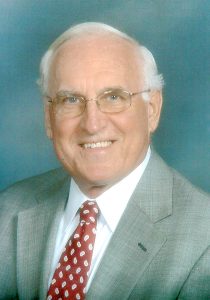 Wayne Edward Johnson, of Hickory, passed away Thursday, July 15, 2021, at his residence surrounded by his family.

Born April 30, 1935, in Alexander County, he was the son of the late Gaither Garland Johnson and Estelle Starnes Johnson.

Mr. Johnson graduated from Taylorsville High School, Class of 1953. He made his career in the furniture industry, retiring as an executive, and afterward working as a consultant. Mr. Johnson was an active member of Viewmont Baptist Church where he served as a deacon, as well as on many committees. He enjoyed playing golf and was a member of a local golf club. Mr. Johnson also enjoyed traveling with his wife, especially in Israel.

In addition to his parents, he was preceded in death by a sister, Mildred Johnson Honeycutt, and a brother, Terry Johnson.

A funeral service will be held at 3:00 p.m. on Sunday, July 18, 2021, at Viewmont Baptist Church with Reverend Ray Ledford officiating. Burial will follow in Bethlehem Baptist Church Cemetery in Alexander County. The family will receive friends an hour prior to the service, from 1:45 – 2:45 p.m., at the church.

The family wishes to express their appreciation for the tender and loving care that Carolina Caring provided their husband and father.

Bass-Smith Funeral Home is serving the family of Wayne Edward Johnson and online condolences may be sent to www.bass-smithfuneralhome.com.