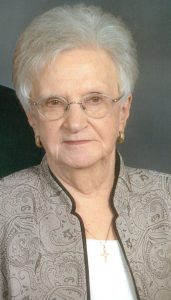 Ruby Ethel Bowman Fox Warren, 87, passed away at her home in Taylorsville on Sunday, September 12, 2021, after a period of declining health.

She was born June 13, 1934, to the late McCree and Grace Honeycutt Bowman. She was a member of Antioch Baptist Church but recently started attending Mountain Ridge Baptist Church with her daughter.

During her working career, she sewed in the furniture industry and later ended up training people to sew. Mrs. Warren was an all-around homemaker, she enjoyed making quilts, giving away fried pies, canning, gardening, and making meals for Habitat, Church, and Harry’s Hands. Most of all, she enjoyed feeding her family and spending time with them.

The family would like to give a special thanks to Rev. Mark Adams, Rev. Mark Morris, Alexander Hospice, and for all the friends and family that have stopped by in the past several weeks.