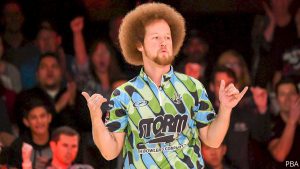 “Winning Player of the Year was one of my goals coming into the season,” said Troup. “In 2020, I won three titles and realized I might be closer than I thought to having a shot at it. I put a lot of work in at the end of the 2020 season that got me mentally prepared to shoot for winning a major and Player of the Year.”

In 2021, Troup won the season-opening PBA Players Championship for his first major title, banking a PBA record-tying $250,000 first prize for the win. Troup also won the PBA Playoffs for his eighth career title, tying the total his father, Guppy, amassed on the PBA Tour.

“To catch my father with eight titles was such a humbling, great experience for my family and me,” said Troup. “One of my goals for next season is to pass Gup. I need to put the time in and keep working hard, but I think eventually I’m going to be the boss of the family when it comes to bowling.”

One of three players, along with Tom Daugherty and Shawn Maldonado, to win two titles in 2021, Troup also finished fifth in the Guaranteed Rate PBA World Championship and seventh in the Kia PBA Tournament of Champions, giving him three top-10 finishes in majors among nine top 10s overall. Troup also posted three runner-up finishes during the season.

“I need to stay present,” said Troup. “It’s a humbling feeling to join the list of great bowlers who have earned this honor, but now I need to work even harder, get smarter and get tuned up for the beginning of the year if I want to stay on top. There are a lot of guys who can pop off three or four wins in a season, so 2022 might be the toughest yet to win Player of the Year.”

“I’ve always wanted to win titles, majors and get into the Hall of Fame, but to hold a record?” said Troup. “That’s one thing I never really dreamed about. And to pass Walter Ray, one of the best ever to throw a bowling ball, is a special moment. It’s very nice to have but I want to see the record broken in the future. I want to see someone win a million dollars in a year.”

Troup will begin the 2022 season as the defending champion in the PBA Players Championship, which begins with the regional qualifying rounds on January 15.

Find a list of all Chris Schenkel PBA Player of the Year Award winners dating back to 1963 here: https://www.pba.com/player-resources/scholarships-and-awards/player-of-the-year

The Professional Bowlers Association (PBA) is the world’s preeminent organization dedicated to the sport of bowling and its professional competition, with thousands of members and millions of fans throughout the world. The PBA plays host to bowling’s biggest tournaments from the PBA Tour, PBA Regional Tour, and PBA50 Tour. In 2020, the PBA launched PBA Jr., a club for elite youth bowlers under the age of 17 and the PBA Pinsiders, a membership for fans of the sport. For more information, please visit PBA.com.