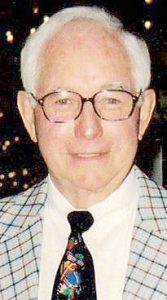 Born November 25, 1928, in Caldwell County, he was the son of the late Jarvis Coley and Bergie Bush Tolbert.

In addition to his parents, he was preceded in death by his wife of 58 years, Patricia Yates Tolbert; brother, Harold Edward Tolbert; and sister, Nancy Tolbert Long.

John was a graduate of Lenoir High School, graduated from Davidson College, and did post-graduate work at UNC-Chapel Hill.

He joined the US Navy as an officer serving during the Korean War. He then worked at Price Waterhouse in New York City followed by his move to Hickory to join Thomas V. Bumbarger & Co. as a CPA. After his retirement, John worked in real estate and was a general contractor.

He served as a member of the Hickory Rescue Squad for many years, was a Winter Emergency Care Instructor, and served on the Sugar Mountain Ski Patrol.

John was an avid golfer, a member of the New Horizon Band playing the trombone, and he also loved sailing. He was always active personally as well as in the community. John never met a stranger and made everyone he met feel special. He was loved by his family and many friends.

A graveside service with full military honors will be held at 11:00 a.m., Saturday, February 26, 2022, at Blue Ridge Memorial Park in Lenoir.

Bass-Smith Funeral Home is serving the Tolbert Family and online condolences may be left at www.bass-smithfuneralhome.com.