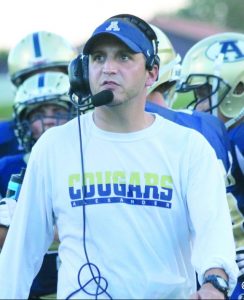 After serving as an assistant coach at Alexander Central for the past 10 seasons, Matt Wilson has been named the new Head Football Coach at West Iredell High School in Statesville.
The Newton-Conover and ASU grad was officially tapped as the Warriors’ new coach on Monday.
Wilson, who came to ACHS in 2012, spent the last eight campaigns as the Head JV Coach and varsity offensive coordinator for the Cougars.
“I am extremely grateful for my 10 years at ACHS and forever indebted to the people there. I have gained knowledge, been allowed to grow as a coach, and created lifelong friendships. I would like to thank the administration teams under Mr. Rhoney and Mr. Palmer for their leadership and guidance. Thanks to the assistant coaches for always making work fun and for your trust and loyalty. I have been beyond blessed to work under such great head coaches as Nick Bazzle and Butch Carter. Coach Bazzle is Nick Bazzle. He is the sole reason why I started coaching. He is my rock! He is my dad! Coach Carter is a great leader of men. He is selfless and a man of high character. I’m honored to call him my mentor and family for life,” Wilson said.
He continued, “Lastly, to the players, I knew this was going to be the hardest decision I have ever made because of the kids at ACHS. Words cannot express the gratitude I have for every player on the field and students in the classroom. The parents of Alexander County have raised such wonderful human beings. That’s the hardest for me, leaving the players. My wife and I are excited for the next chapter in leading the West Iredell football program. There is a strong foundation of leadership in the administration team and assistant coaches. We are eager to attach ourselves to the community, school, and players. Forever AC.”
During his tenure as the Head JV Coach at ACHS, Wilson’s teams finished with a 67-8 record in eight seasons. Included in that impressive overall record was an eye-popping 47-game winning streak that included five straight unbeaten campaigns. The winning streak ran from 2015 until it was snapped early last season.
As the varsity offensive coordinator, he led an ACHS offense that set a school record for points (525) scored in a season in 2016, and in a single game with 82. He coordinated the Cougar offense that set the NCHSAA record for rushing yards (801) and total yards (927) in a game on September 16, 2016, at Ashe County. The Cougars defeated the Huskies 82-42 that evening.
“Coach Matt Wilson will be a very successful head football coach. We are grateful for the time, effort, and passion that he has given to our football program at ACHS. We wish him great success and support in this new chapter of his coaching career,” Alexander Central Head Coach Butch Carter commented.
Wilson replaces Shannon Ashley as the Head Coach for the Warriors. He inherits a West Iredell program that won one game each of the past two seasons, finishing 2-13 over that two-year stretch. West Iredell has not enjoyed a winning season in football since finishing 7-5 in 2010 when the Warriors were coached by longtime Coach Mark Weycker.