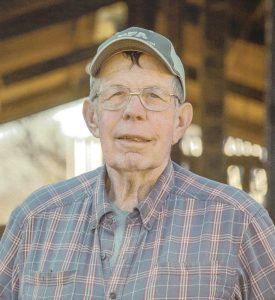 David William “Bill” Chapman, 77, of Taylorsville, entered his heavenly home to be with his Savior on May 21, 2022.

He was born in Emmetsburg, Iowa, on September 13, 1944. He was the son of the late David Chapman Jr. and Wilma Jones Chapman. Bill lived in Iowa until 1953, when he and his family moved back to North Carolina. He was a US Army veteran.

Bill often referred to himself as the richest man in the world, not because of earthly possessions, but because of his relationship with his Savior, Jesus Christ, and his close family unit. He accepted Jesus as his Savior in March of 1962. Bill followed the Lord’s leadership in all areas of his life.

He was a deacon at Three Forks Baptist Church, served in a teaching role in the church for 50 years, served on numerous committees including the Alexander Soil and Water Conservation District, Farm Bureau Board of Directors, and was a past President of the North Carolina Jersey Milk Producers Association.

He spent his life building and managing Chapman Jersey Farm. His dairy farm was and continues to be a place of learning and safety, not only for his family, but also for the many young men and women who chose to work there. He impacted so many lives with his wisdom and his common-sense approach to learning and living.

Next to his salvation, Bill’s family was his pride and joy. He often spoke of how proud he was of them and how thankful he was that his whole family went to church together. Bill was known for his wisdom and spiritual advice, devotion to his family, and his determination to endure and survive hardships of any kind.

In addition to his parents, he was preceded in death by two sisters, Patricia Jordan and Cindy Eurey.

The family will receive friends from 6-8 p.m., Saturday, May 28, 2022, at Three Forks Baptist Church. The funeral service will be held at 4 p.m., Sunday, May 29, 2022, at Three Forks Baptist Church. Dr. Carson Moseley and Dr. Mike Runion will officiate. Burial will follow in the church cemetery with full military honors accorded by Alexander County Veterans Honor Guard and taps will be played by David Land.

Pallbearers will include Bill’s grandsons, grandsons-in-law, and nephews, Matt Jordan, Will Jordan, and Shane Galliher.

In lieu of flowers, memorials may be made to Three Forks Baptist Church, 4685 Three Forks Church Road, Taylorsville, NC or to Samaritan’s Purse.

Adams Funeral Home and Cremation Services is honored to be serving the family of David William “Bill” Chapman.