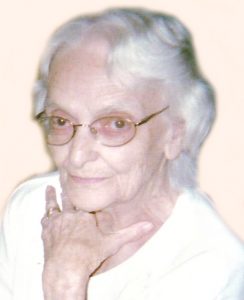 Mrs. Goble was born June 23, 1923, in Alexander County, the daughter of the late Mark Dyson and Lona Mae Logan Dyson.

Rachel was a homemaker and a member of Beulah Baptist Church. She loved her flower garden as well as her vegetable garden.

Including her parents, she was preceded in death by her husband, Kelly Edward Goble; a grandson, Ray Bowles; three brothers, Ray Dyson, Cranford Dyson, and John Dyson; and a sister, Blanche Crouch.

The funeral service will be held at 3 p.m., Saturday, July 29, 2017 at Adams Funeral Home Chapel. Rev. Elbert Goble and Rev. Jamie Steele will officiate. Burial will follow in the Taylorsville City Cemetery. The family will receive friends one hour prior to the service.

Adams Funeral Home and Cremation Services is honored to be serving the Goble Family.