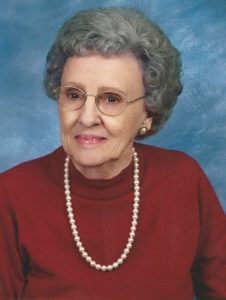 She was born on February 4, 1922, the daughter of the late William “Dewey” and Mary Elizabeth “Lizzie” Allen Owings. Katherine had worked for Schneider Mills and also as a child care worker for First Baptist Church Daycare Center.

She was a faithful member at East Taylorsville Baptist Church where she served as a Sunday School teacher and sang in the choir. She also sang in the Community Choir and served as a volunteer at the Alexander County Hospital for a number of years. Katherine was awarded “Community Volunteer of the Year.”

After retirement, she and her husband “Bud” enjoyed going and visiting the nursing homes and the community. She loved her family and was a wonderful wife, mother, grandmother, sister, and friend.

Along with her parents, she was preceded in death by her husband, Irving “Bud” Minor Brewington, Jr; a son, Robert C. Brewington; brothers, Bill and Charles Owings; and a sister, Dorothy O. Fagan.

The family will receive friends on Thursday, October 12, 2017, from 1:00 p.m. – 2:00 p.m., at East Taylorsville Baptist Church, and the funeral service will follow at 2:00 p.m., with Rev. Jamie Steele and Rev. Gary Jennings officiating. Burial will follow at the Taylorsville City Cemetery. Grandsons will serve as Pallbearers.