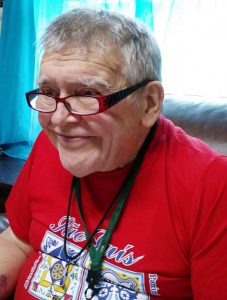 Jerry Saunders, 70, of Conover, is now rejoicing in glory, all because of Jesus Christ, passed away Sunday, April 15, 2018 at Valley Nursing Center.

Mr. Saunders was born December 23, 1947, in Iredell County, the son of the late Joseph Lester Saunders and Genoa Thompson Saunders.

He was a member of North Newton Baptist Church. He loved his Lord Jesus Christ and wrote many poems about his Savior. While attending Gardner Webb, studying to be in the ministry, Jerry was in a car accident, which ended his college.

His sister Joy meant so much to him and they were baptized the same day. He and Joy lived at the Alberta House for 16 years, there ministering to everyone they came into contact with. He had a heart of gold.

Those left to cherish his memory include his sister, Joy Saunders of Alberta House of Conover, and many special friends at Willing Hands of Sandy Ridge Baptist Church and the Alberta House, especially Becky Bengie and Jeanie Triplett.

Memorial service will be held at a later date.