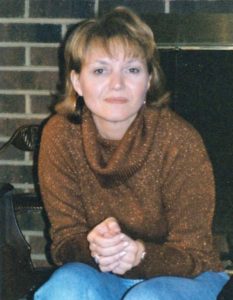 Angela Suzanne Pennell, 56, died on Wednesday, April 18, 2018 after a heroic battle against pancreatic cancer. She was the daughter of James Harold Pennell and the late Helen Martha Wilson Pennell of Taylorsville.

In addition to her father, Angela is survived by her daughter, Sloan Stevenson of Charlotte; sisters, Myra Pennell of Lenoir, Jan (David) Lackey of Statesville, and Sarah Pennell of Taylorsville; and nephew, Jesse (Faith) Lackey of Monroe.

She was a 1979 graduate of Alexander Central High School in Taylorsville, and was a licensed realtor who lived in Huntersville, where she was a property manager at Park Avenue Properties.

Angela cultivated many loving friendships wherever she went, and those friends join the family in honoring and missing the bright light she was in all of our lives.

The family will receive visitors on Sunday, April 29, from 2:00 p.m. – 3:30 p.m., at Alexander Funeral Service. A memorial service to celebrate her life will follow in the funeral home chapel, at 3:30 p.m., with Rev. Gary Jennings officiating.

Memorial contributions may be made to the American Cancer Society at www.cancer.org.