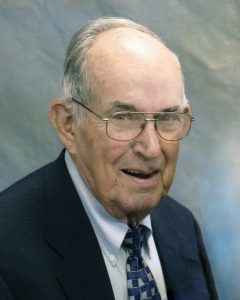 John Hall Echerd, 87, of Taylorsville, moved to Heaven on Friday morning, October 12, 2018 from Valley Nursing Center. He had been in declining health for 10 months and seriously ill for three days.

John Hall was born February 27, 1931, in Alexander County, to Dallas George and Ida Cleo Burgess Echerd. He proudly served his country in the US Army during the Korean Conflict, where he was wounded and awarded The Purple Heart.

John Hall was the first licensed general contractor in Alexander County, building many residential and commercial buildings for the families and businesses of Alexander County.

Preceding him in death, along with his parents, was his beloved wife of 66 years, Betty Lou Harrington Echerd, on March 4 of this year, and all his siblings, brothers, Howard, William, Lynn, and Bruce Echerd, along with sisters, Thelma McLean and Linda Douglas.

He leaves behind to honor and cherish his memory three children, sons, Jeffrey Echerd, Johnny Echerd and wife Dottie, and daughter, Libby Echerd Pennell and husband Roger, all of Taylorsville; four grandchildren, Chris Echerd and wife Kim, Cody Echerd and wife Landy, Alisha Goggans and husband Kris, and Allie Kaylor and husband Justin; and great-grandchildren, Jonathan, Laryn and Hayley Echerd, Karson, Koen and John Thomas, Ruby Goggans, and Landry Kaylor. He is also survived by many nieces, nephews, and his friends and caretakers at Valley Nursing Center.

The family will receive friends on Sunday, October 14, from 2:30 to 3:45, with a memorial service to follow at 4 p.m. at St. Luke Lutheran Church. Pastor Andrew Miller will officiate. Inurnment to follow in the Memorial Garden. Military rites will be provided by the DAV Chapter 84 of Taylorsville and Chapter 6 of Hudson.

In lieu of flowers, memorials may be made to the Memorial Garden at St. Luke Lutheran Church, 1364 Church Rd, Taylorsville, NC 28681.

The family wishes to thank Valley Nursing Center for the excellent care you gave Daddy the 10 months he lived there. He loved all of you.