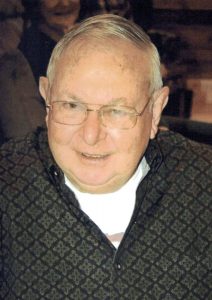 Born May 15, 1935, in Alexander County, he was the son of the late Josie White Auton and David Alexander Auton.

In addition to his parents, he was preceded in death by his wife, Barbara Jean Wright Auton; grandson, Dustin Burns; three brothers, Glenn, Ben and Herman Auton; and three sisters, Alda A. Petree, Buena A. Barger, and Eva A. Alspaugh.

Mr. Auton was a veteran of the U.S. Navy, serving during the Korean War, and was a member of both the American Legion and the VFW. He had retired from Sara Lee Textiles. He was also an avid golfer and loved spending time on the course with his friends.

Due to Covid-19, a private family graveside service will be held at Woodlawn Memorial Gardens in Hickory.

In lieu of flowers, the family requests memorials may be sent to Veterans Affairs of America or to the VFW.

Bass-Smith Funeral Home in Hickory is serving the family of James Kenneth “Apple” Auton and on-line condolences may be left for the family at www.bass-smithfuneralhome.com.