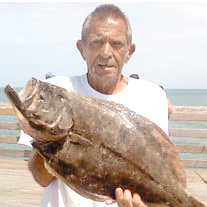 Born in Boone, he was an avid fisherman. He held several fishing records and was a member of the Surfside Fishing Club. Clyde would do anything for anyone and would give the shirt off his back. He was a very hard worker and very strong. Clyde loved his family, especially his grandchildren and great-grandchildren. He was the owner of Clyde’s Carpet Service Inc.

Clyde was preceded in death by his father, Clyde J. Teaque.