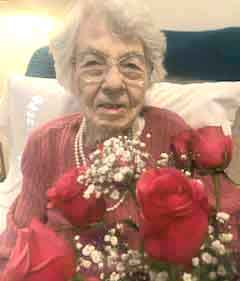 Virginia Kathryn Clay Farthing, 105, passed away Saturday, November 13, 2021. She was a resident of Rose Glen Village in Wilkesboro.

Funeral services will be held at 2:00 p.m., Sunday, November 21, 2021, at Wilkesboro Baptist Church with Dr. Chris Hefner officiating. Virginia will lie in state thirty minutes prior to the service. Burial will follow at Mount Lawn Memorial Park in Boone.

They lived in Boone until 1952 when they moved to Taylorsville, where James became manager of Northwestern Bank. They were active members of First Baptist Church. James served as a Deacon and Sunday school teacher. Virginia worked with the WMU and also taught Sunday school for over 50 years. She belonged to the Red Bud Garden Club and several book and bridge clubs. After James’ death, Virginia moved to Wilkesboro. She was a member of Wilkesboro Baptist Church.

In addition to her parents, she was predeceased by her husband of 54 years and siblings, James Edward Clay, Jr., William Earl Clay, Gail Clay, Kenneth Clay, and Harry Clay.

In keeping with church policy, the family requests that everyone attending the service wear a face covering.

In lieu of flowers, memorials may be made to Samaritan Kitchen of Wilkes, Backpack Program, P.O. Box 1072, Wilkesboro, NC 28697.