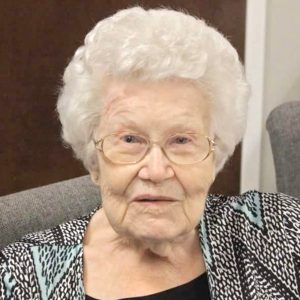 Myrium Arlene Ballard Stewart, 91, of Taylorsville, passed away on Friday, February 25, 2022, while surrounded by her family in Bethlehem.

She was born on August 8, 1930, in Wilmington, North Carolina, to Edgar Levett Ballard and Mary Lee Woodside. The family, including her late brothers, Thomas Levett Ballard and Woodus Lenair Ballard, moved to Taylorsville in 1947.

Myrium was preceded in death by her husband, Flake Eugene Stewart. The couple married in 1948 and remained firmly together for 55 years until Flake’s death in 2004. She was a member of First Methodist Church and worked at Smithey’s Department Store for 35 years.

Myrium was dedicated to caring for her family and hosting dinner every Sunday at her house in Taylorsville where you could always count on a delicious meal and the booming ruckus of children. She was a voracious reader who also enjoyed cake decorating and sewing. The family would like to thank everyone for their kindness and love over the years, and especially during this difficult time.

Visitation will be held Monday, February 28, 2022, at Alexander Funeral Service, from 2:00 to 2:45 p.m. The funeral service will be held in the Alexander Funeral Service Chapel at 3:00 p.m., Monday, February 28, 2022. Burial will be in Union Cemetery at Marvin United Methodist Church on Tuesday, March 1, 2022, at 11:00 a.m., where she will be laid to rest next to her husband, Flake. Rev. Joel Simpson will be officiating. Pallbearers will be grandchildren.

In lieu of flowers, please consider a donation to the Alexander County Library at 77 1st Ave SW, Taylorsville, NC 28681, to share Myrium’s love of reading.