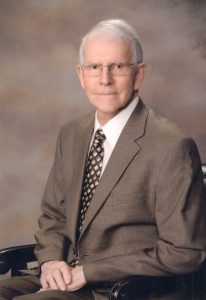 Samuel James Zachary, 94, a long-time resident of Taylorsville, died surrounded by his family at his home in the Arbor Acres United Methodist Retirement Community in Winston-Salem on Friday, March 18, 2022.

Sam was born May 15, 1927, in Elkin, to the late Christine Tatum and Lawrence Pugh Zachary. He graduated from Taylorsville High School in 1944. After briefly attending N.C. State, he served on active duty in the U.S. Navy and participated in the NROTC unit at Alabama Polytechnic Institute (Auburn University). He graduated from Auburn in 1949 with a degree in electrical engineering.

After a brief stint with AT&T in New York City, Sam happily returned to Taylorsville in 1951 to work in a new and risky business venture: a community-owned railroad. His career at Alexander Railroad Company spanned 36 years, beginning as a locomotive engineer, succeeding his father as general manager in 1956, and later serving as president. Under his leadership, the company became one of the most successful short-line railroads in North Carolina and an important economic development resource for the region.

The love of Sam’s life was the former Ophelia Pierce Ingold of Taylorsville. Ophelia and Sam married on June 27, 1953. Together for 51 years, they wholeheartedly embraced a life of family, church, and community.

Sam was a lifelong member of First United Methodist Church Taylorsville and Ophelia joined in 1953. They both loved First UMC and served in many different capacities over the decades.

Sam retired from railroading in 1987, but not from community service. During his golden years, he could be found hanging sheetrock at Habitat houses or volunteering as a lunch buddy at Taylorsville Elementary School. His manner was calm, kind, and low-key. He lived the Rotary motto “Service Above Self.”

Sam received the State’s highest civilian honor, Order of the Long Leaf Pine, in 2007 in recognition of his many years of public service. The Alexander County Chamber of Commerce recognized him as Citizen of the Year in 1983 and with its inaugural Community Leadership Award in 2007. If Sam was involved, he made a difference.

Sam lived the last 15 years of his life in the Arbor Acres Retirement Community of Winston-Salem. He was a Christian servant, delivering hot lunches throughout the city for Meals on Wheels. He was a leader, serving several years as a resident representative with the North Carolina Continuing Care Residents Association and chairperson of the annual Residents Christmas Giving Campaign. He was a friend, teaching himself and many other residents how to play pool and then enjoying the fellowship of daily play. And, occasionally, he was a reluctant showman, playing the spoons and singing in the residents’ musical group “Sharps and Flats.”

In addition to his parents, Sam was preceded in death by his beloved wife, Ophelia; a brother, L. P. Zachary, Jr.; and two sisters, Christine Z. Gilbert and Lillian Z. Brookshire.

A graveside service will be held at 11 a.m., Saturday, April 2, 2022, at the Taylorsville City Cemetery with Rev. Joel Simpson of First United Methodist Church officiating. Later that day, at 3 p.m., there will be a Celebration of Life service in Piner Hall at Arbor Acres United Methodist Retirement Community (1240 Arbor Road, Winston-Salem, NC) with Chaplain Bert Sanders officiating. As a courtesy to all, the family asks attendees of the Celebration of Life service to please wear a mask while inside Arbor Acres buildings.
In lieu of flowers, the family requests that memorials be made to Taylorsville Rotary Foundation, PO Box 86, Taylorsville, NC 28681; or First United Methodist Church, 1400 Hwy NC 16 S, Taylorsville, NC 28681.

Adams Funeral Home and Cremation Services is honored to be serving the family of Samuel James Zachary.